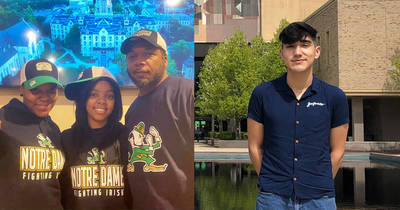 (L-R) Faith Vaughn with her parents celebrating her admission to Notre Dame and Andres Alvarez standing in front of the Theodore M. Hesburgh Library

Career Academy is the flagship partner with the IDEA Center in this effort. Over time, the goal is to increase the number of students to as many as 20 per year from the greater South Bend region, not just from Career Academy.

While at Notre Dame, IDEA Center Fellows will be required to either pursue their own startup business or provide support to an existing one. They will also be mentored by seasoned entrepreneurs in the Notre Dame network, be exposed to the many aspects of entrepreneurship and work at the IDEA Center.

The long-term goal of this program, says Bryan Ritchie, the vice president and Cathy and John Martin Associate Provost for Innovation at Notre Dame, is to increase the number of minority founders and minority-owned startups in the South Bend community.

“Over the last 15 years, startups have created enormous wealth and upward mobility opportunities for millions of people in this country,” Ritchie said. “Unfortunately, this hasn’t been evenly distributed. Less than 3 percent of venture capital investments go to Black or Latinx founders and even though minorities comprise 32 percent of our nation’s population, only 18 percent of businesses are minority-owned. These numbers aren’t from a lack of trying. Rather, they’re the result of a lack of access to capital, resources and opportunities. We believe that giving young, underrepresented entrepreneurs access to these things, along with a quality education at Notre Dame, will help increase the number of minority startup founders within our community.”

Alex Hammel, superintendent of Career and Success Academy South Bend, said that this partnership with the IDEA Center was a natural fit due to both programs’ focus on entrepreneurship and entrepreneurial education.

Such is the case with Vaughn who runs the business Cuties on Duty--which teaches etiquette to middle and high school girls--with her mother.

“Both working on this business while still in high school and the access to so many hands-on opportunities Career Academy gave me has really prepared me for where I am now,” she said.

Alvarez has been immersed in the world of entrepreneurship from a young age due to his parents both being entrepreneurs.

“I know what being an entrepreneur entails just from growing up with two of them,” he said. “Watching what they have done really attracted me to that lifestyle.”

Both Vaughn and Alvarez are thrilled to be attending Notre Dame and are grateful for the opportunity the IDEA Center Fellows program has offered them.

“Even though I was at work when the day of admissions decisions came around, I kept going to the break room to check my phone,” Alvarez said. “When the decisions were finally posted and I learned I had been admitted to Notre Dame, I was extremely excited, as were my parents that night.”

Adding to this, Vaugn said, “Even a year ago, the thought of attending Notre Dame seemed like an unachievable dream to me, especially because I am the first in my family to attend college. Now that it’s actually happening, I want to be an example to the rest of my extended family and community that no, it’s not just a dream; it’s not so far away. It’s achievable and something you can do too.”