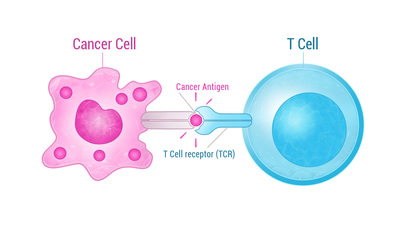 In the fight against cancer, sometimes all the body needs is a sharper focus to separate the bad cells from the good, and an IDEA Center-backed startup is providing just that.

Cancer immunotherapy researchers in recent years have learned how to train the body’s immune system to recognize and destroy cancer cells, leading to new possibilities for cancer treatment. One type of cancer immunotherapy, T-cell receptor (TCR) therapy, reprograms the body’s T-cells — a special type of white blood cell — to target specific markers, known as antigens, produced by the cancer cell.

On the surface of the T-cell is a TCR molecule which recognizes the target antigen on the cancer cell and binds to it, starting a chain reaction that ultimately destroys the cancer cell.

While this treatment has shown tremendous success in certain areas, it still has some weaknesses. If the T-cell fails to distinguish between cancer antigens and healthy cell antigens, the T-cell could end up destroying healthy tissue as well. This side effect, known as off-target toxicity, has potentially fatal consequences.

Enter Structured Immunity, an IDEA Center-backed start up that engineers T-cells to be more focused on the cancer antigen, reducing the risk of adverse side effects, and ultimately helping to develop a more effective cell therapy. 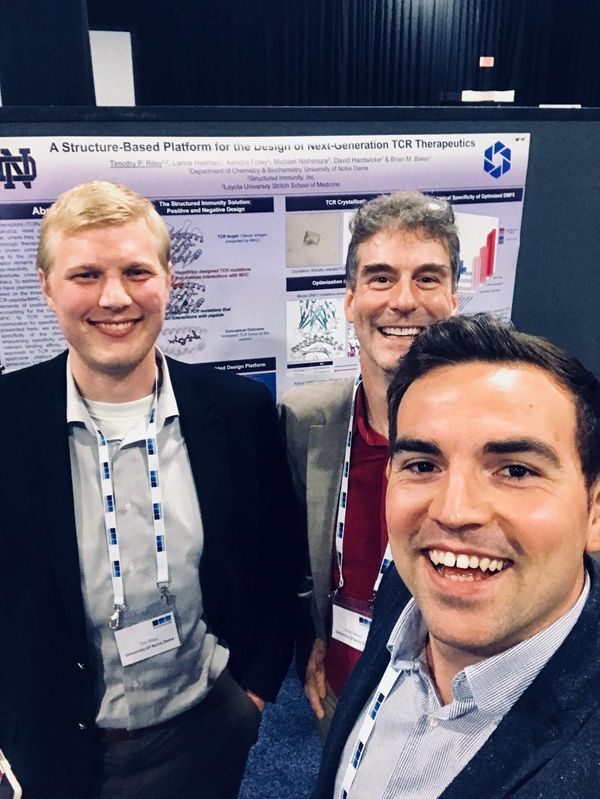 Tim Riley, Brian Baker and David Hardwicke of Strucutred Immunity at a conference in Boston.

Behind the science is Dr. Brian Baker, professor of structural biology at the University of Notre Dame, and Ph.D. student Tim Riley. Together, Baker and Riley have been researching and engineering TCRs for over 20 years at the Harper Research Institute, and they hold three patents in the field.

Baker and Riley, taking inspiration from biophysics and protein design research, realized that engineering more precisely targeted T-cells required an understanding of how they function — and how to manipulate them — at a molecular level.

“The problem of cross-reactivity is fundamentally a structural problem,” Baker, Structured Immunity’s scientific adviser, said. “Unlike any other field, this problem is just screaming for a structure-based solution to it.”

Structured Immunity uses computational and experimental methods to match TCRs to target antigens, Hardwicke said. The company employs computer algorithms to rank a pool of T-cell receptors for potential fit before using biophysical research methods to verify that they strongly bind to the target antigen.

But too strong of a bond between T-cell and its target antigen is as undesirable as too weak of one, Riley, Chief Scientific Officer of Structured Immunity, said.

“One of the things that distinguishes TCR-based immunotherapy from others is that high-affinity is not right,” Riley said. “T-cells don’t work if they stick too tightly.”

Producing a fit between TCR and antigen that is just right requires a detailed understanding of how proteins bind, and how to manipulate the glue holding proteins together, Riley said.

“What we do is an iterative process to make things bind better,” Riley said. “We have to know where the glue is, figure out how the glue is distributed, and then add glue to the particular antigen.”

Structured Immunity offers its services to pharmaceutical companies that manufacture TCR immunotherapies. In order to develop safe and effective drugs, these companies must first test a pool of TCR candidates for potential fit to a particular cancer antigen.

At this stage, a company contracts with Structured Immunity to apply their unique platform technology to the candidates’ TCRs, enabling the development of safer, more effective molecules. Ultimately, Structured Immunity’s services de-risk the chances of off-target toxicity occurring in clinical trials.

The start-up’s expertise in structure-based manipulation of TCRs means its services offer a lot of value to the established pharmaceutical companies in the field, Hardwicke said.

“While companies that develop therapies understand Structure-Guided Design is an effective way to develop a TCR, many don’t have the expertise that Structured Immunity has,” he said. “That’s where we fit in with our technology.”

Hardwicke anticipates Structured Immunity will find its niche in the TCR immunotherapy market, which, though currently composed of 15-20 companies, shows signs of massive growth.

“We’re focused on how many therapies these companies are working on,” he said. “That pool grew 40 percent last year. As they’re growing, there’s more to do in the pre-clinical stage, where we add our value.”

Hardwicke acknowledged the IDEA Center’s support in building a company based on Baker’s and Riley’s research. The incubator has provided office space for the startup, and was an early investor in the company, helping to fund employee salaries and customer acquisition opportunities such as attending industry conferences, Hardwicke said.

“The Idea Center’s early and continued support gave us the runway we needed and allowed us to focus on customer needs,” Hardwicke said. “This enabled us to develop a sustainable, customer-friendly business model.”

Currently, Structured Immunity is focused on establishing partnerships with customers, and is in the process of raising a seed round which will allow it to continue its progression, Hardwicke said.

“It’s a very exciting time for the company. We have a fantastic team and our technology is fully developed and ready to go.”