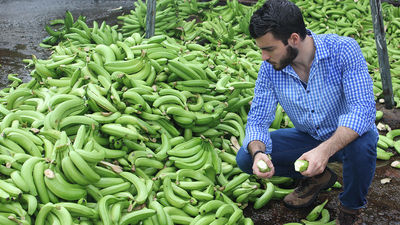 Growing up in Ecuador, University of Notre Dame alumnus Lucho Escobar watched as his father sorted mangoes to sell and export. The best mangoes would go to the United States and Europe. The less than perfect ones would stay in South America. But a staggering number of perfectly ripe fruit would end up in landfills — not because it was spoiled or rotten, but simply because its shape wasn’t quite perfect.

According to Escobar, Ecuador is one of the world’s top exporters of tropical fruits, but more than 25 percent, or about 1.2 million tons, is thrown away every year. Escobar saw an opportunity to reduce waste, help the environment and begin a sustainable business. He realized he could buy the fruits at a discount because of their appearance (the farmer was just going to discard them anyway), and then chop and package them along with superfoods from Ecuador for individual, ready-to-blend smoothies to be delivered to busy professionals who are committed to healthy eating but don’t have time to cook. After blending, the same cup can be used on the go. Thus, Takay Blends was born.

“Most people think a small fraction of fruits get rejected because they have spots and could make you sick,” said Escobar. “The truth is a staggering amount of fruit gets discarded just because it does not have the exact shape required by supermarkets. I wanted to use the waste to create something that was both healthy and helpful to people.”

It began small. Escobar and his brother went to Ecuadorian farms, bought the misshapen fruits at a huge discount, collected the fruit themselves, and went home and chopped everything. In a paper cup, they’d add the fruit plus superfoods like walnuts, flax seeds, oats and quinoa to make a well-rounded meal replacement, which they’d then freeze before delivering to customers in Ecuador. Those customers would merely need to dump the contents of the cup and some milk into a blender to make a nutritionally rich, quick and cost-effective breakfast.

“I think if it’s a breakfast, it should fill you up and fuel you so you can be energized to do whatever you need to do that day,” said Escobar. “One thing that is great about Takay is all our flavors have a consistent value in protein, healthy fats and fiber, so it’s actually a complete breakfast.” 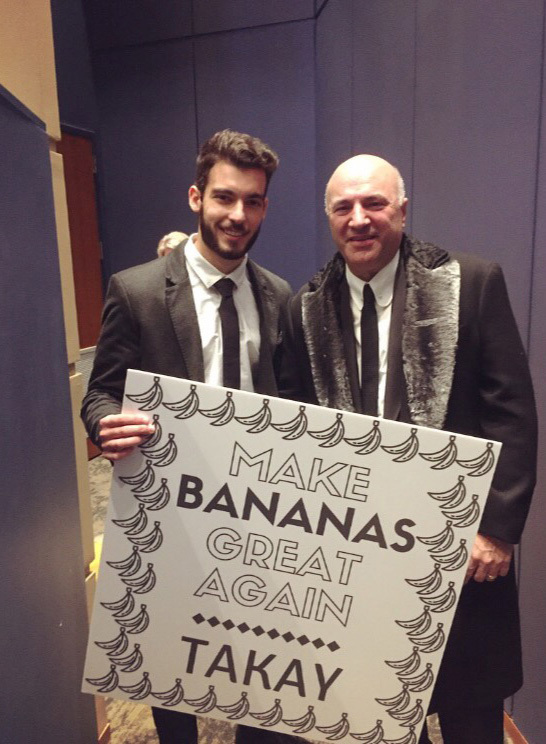 He notes all the smoothies from Takay, which means “to blend” in native Ecuadorian Quechua, are preservative-free, gluten-free and vegan-friendly, and are designed by chefs and nutritionists to keep consistent nutritional value and flavor across the menu. There are also a few smoothies which include natural caffeine options like guayasa and moringa, tea plants native to Ecuador.

As graduation approached, Escobar decided to grow his business by filing for a utility patent for his product and by taking advantage of several Notre Dame opportunities. As a senior, he pitched Takay Blends to “Shark Tank” investor Kevin O’Leary while he was on campus in January 2017. Escobar’s company also won Notre Dame’s McCloskey Business Plan Competition and his company was sent as the Notre Dame representative to compete for the ACC InVenture Prize.

The feedback and awards from these competitions have allowed him to improve Takay and prepare it to enter the marketplace. The contests also paired him with valuable mentors like Karen Slaggert, director of student entrepreneurship at the IDEA Center and director of the McCloskey Business Plan Competition; Tim Connors, founder of PivotNorth Capital; and Bob Sutton, local managing director of Springboard Engineering Solutions, LLC, and pre-round judge in the McCloskey Business Plan Competition.

Slaggert says, “What was incredible about Lucho was that when he asked for help, when he was curious and asked questions, he followed up on the advice we gave him. When we pointed him in the right direction, he ran with it; he was ready to learn and move forward with his ideas.”

Escobar is now at work developing subscription software, managing the patent process on his cup and preparing for his upcoming Kickstarter campaign to bring Takay to the American market. Takay will also take pre-orders for smoothie boxes at a price of $35 for six smoothies or $100 for 24. With an average smoothie cost between $4 and $6, Takay’s ugly fruits save consumers a few dollars per smoothie and save a lot of landfill waste.