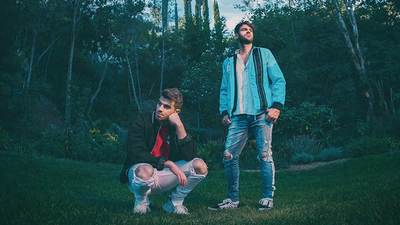 The Grammy award-winning and Billboard chart-topping duo The Chainsmokers will perform at the University of Notre Dame in April during IDEA Week, an event that celebrates innovation, entrepreneurs and the incubation of new ideas.

The Chainsmokers will perform April 27 (Friday) at the Purcell Pavilion at the Joyce Center, the first concert in that arena since 2006.

A primary goal of Idea Week is to introduce entrepreneurs, developers, makers, inventors, designers and investors to each other and to highlight the economic growth and innovation that is moving the region forward. The musical performance serves a strategic purpose for Idea Week planners, according to event director Nick Swisher.

“Including fun events, such as the performance by The Chainsmokers, is just one way to help attendees relax, unwind and meet other attendees,” he said. “And maybe someone you meet becomes your next client, customer or business partner.”

“When teams of like-minded people tackle a project, the project has a greater chance at success,” Swisher said. “We call this a ‘productive collision,’ which is a key principle of Idea Week.”

Idea Week events, which are open to the public, will be held at Notre Dame and other locations throughout South Bend and Elkhart. Other events include a comedy show by comedian Gabriel “Fluffy” Iglesias; startup competitions offering prizes worth hundreds of thousands of dollars; speakers; workshops; and a TEDx event.

The Chainsmokers have evolved into a dominating musical force with a diverse repertoire of songs that has led them to become one of music’s hottest recording artists. Comprised of the signature sound of artist producer duo Alex Pall and Drew Taggart, the group’s music reaches across indie, progressive and pop realms. Their evolution as producers and as songwriters has led to some of the biggest breakthrough songs over the course of the last two years, and their original tracks and remixes have topped the charts around the world.

In April 2017, the group released their first album via Disruptor/Columbia Records titled “Memories … Do Not Open.” The album debuted at No. 1 in the United States on the Billboard 200 chart and produced the global double-platinum hit “Paris,” which debuted at No. 7, marking the duo’s highest first week entrance on the Billboard Hot 100 chart to date. The double-platinum certified “Something Just Like This” features Coldplay frontman Chris Martin on vocals and peaked in the top five on the Billboard Hot 100 chart. The track most recently earned the group a 2018 Grammy nomination for best pop duo/group performance, as well as three 2018 iHeart Music Awards nominations for song of the year, best collaboration and dance song of the year.

For more information on Idea Week and other scheduled events, visit idea-week.com.

Originally published by Notre Dame News at news.nd.edu on February 01, 2018.