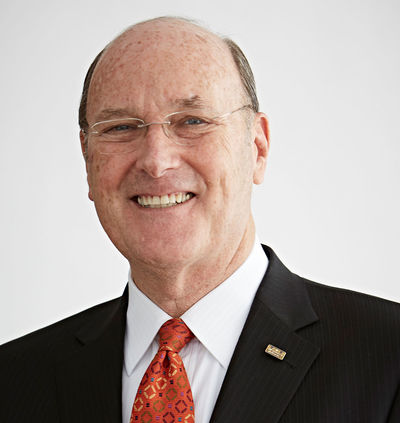 Christopher J. Murphy III, Chairman of the Board and CEO, 1st Source Bank

Each spring, this $20,000 award is presented to a faculty member from the University of Notre Dame or the Indiana University School of Medicine-South Bend for successfully transitioning their technology from the lab to the marketplace.

Beginning tomorrow and continuing periodically up until April 21, the date of the 2020 1st Source Bank Commercialization Award dinner, we will look back at each of the past winners of this award. In these articles and videos we examine the impact these faculty discoveries have had on Notre Dame, the South-Bend Elkhart region and the world. As it turns out, it’s been quite impressive.

The article below tells the story of the award’s origins and the impetus behind its creation.

Chris Murphy has a deep relationship with the University of Notre Dame. He completed his undergraduate degree in South Bend before heading to the University of Virginia for his law degree and Harvard for his MBA. While he attributes Virginia with teaching him how to think and Harvard with teaching him business, Murphy credits Notre Dame for his success.

“Notre Dame gave me the value side of life’s equation: living right and doing right; having a moral compass; the importance of deep friendships; and a strong and lasting commitment to my wife, the mother of our six children. I met her because of Notre Dame so to say I have a special relationship with the university is putting it mildly,” he smiles.

The relationship with Notre Dame, says Murphy, is both familial and business. For the last 46 years, he has served as a director, president, CEO and chairman of 1st Source Corporation and 1st Source Bank. Notre Dame is among the bank’s larger clients. The two organizations have worked together for generations. “We want the same things for the South Bend community and all the people who live here,” he says simply.

While serving on the Indiana Commission of Higher Education, Murphy heard a talk about 12 years ago by then president of Purdue University, Martin Jischke, detailing Purdue’s transformation from a traditional land grant university to a technology commercialization powerhouse. Among Jischke’s most visible accomplishments was Discovery Park, a $100 million multidisciplinary research and entrepreneurial complex on Purdue's West Lafayette campus. What caught Murphy’s imagination was Purdue’s creation of a faculty award recognizing research, discovery and commercialization of their work.

“I came back to South Bend and developed a similar award for Notre Dame, but before taking it to the University’s provost, Tom Burish, I took it to Purdue President Jischke for his advice. Then I presented the idea to Notre Dame,” explains Murphy. “At the time, a culture of risk-taking in commercialization was somewhat nascent to Notre Dame, but thanks to an enlightened and wonderful leadership team headed by Notre Dame President Rev. John I. Jenkins, C.S.C., Vice President for Research Bob Bernhard and Thomas G. Burish, Charles and Jill Fischer Provost, the 1st Source Bank Commercialization Award was born in 2010.”

Backing the annual award was a $1 million gift from 1st Source Bank and the stipulation that each year a deserving faculty or staff member from Notre Dame or the Indiana School of Medicine-South Bend would be given the award for successfully transitioning their intellectual property from the lab to the marketplace. The award is presented by Notre Dame’s president or provost.

The significance—and perhaps the audacity—of the award were not lost on Murphy. “The old paradigm in academia is publish or perish. What the award said to Notre Dame faculty was, ‘Here’s something else that’s important to your career that we, University leadership, also think is important.’ That was a bold move.”

Brockman credits his experience starting a company with changing his career and his life. He is now the director of the Notre Dame Center for Civic Innovation and applies what he has learned through Lucata to social good. Last summer the Center had 60 paid interns working on projects to benefit St. Joseph and Elkhart Counties. “The 1st Source Commercialization Award gives you credibility with both the investment and business communities,” he explains.

Since 2011, nine awards have been presented to faculty members whose commercialization efforts address everything from sports injuries (TayCo Brace) to food safety (Cubed Laboratories) to blockchain (SIMBA Chain). Of the nine winners, eight remain commercially active. Most are located in South Bend and are creating jobs, attracting talent and contributing to the South Bend/Elkhart region’s quality of life. For a list of all previous winners, visit https://bit.ly/3a8NRCf.

Among the perks of winning the 1st Source Bank Commercialization Award is a check for $20,000. However, the honor of winning is more profound, says Bernhard. “I have known most of the faculty for a long time and their acceptance speeches have been poignant. It’s clear they had reflected on their journey. To hear their pride in being recognized and their appreciation for the help they received impressed me.”

Although the number of award nominees has remained constant over the years, those nominated are further along in their startup efforts. Most have a CEO, are hiring staff and generating revenue. Bryan Ritchie, vice president and Cathy and John Martin associate provost for innovation at Notre Dame, leads the University’s IDEA Center that supports commercialization activities. Since 2017, many of the award nominees have gone through the IDEA Center’s Commercialization Engine process designed to de-risk the startup process. He says the biggest impact of the 1st Source Bank Commercialization Award is its “trickle down effect.”

“The award validates our faculty’s work, which in turn engages students to join faculty projects or start their own while energizing the community. I commend 1st Source Bank for stepping forward and taking ownership. It’s incredibly gratifying to have a partner that makes things happen,” says Ritchie.

For his part, Murphy’s greatest satisfaction from the 1st Source Bank Commercialization Award is the impact on the community. “We're developing an innovation ecosystem and new vibrancy in South Bend. We’re very much in our infancy with the award; the commercialization efforts and rewards will continue to grow. The bank’s and the community’s collaboration with Notre Dame affords a richness that wouldn’t be here otherwise. This is truly an exciting time!”