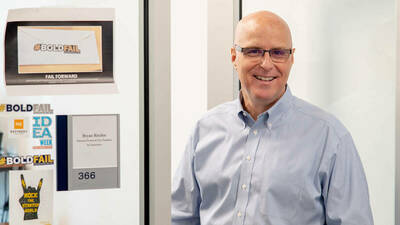 Bryan Ritchie, vice president and the Cathy and John Martin Associate Provost for Innovation at the University of Notre Dame, has announced that he will step down from his position, effective Dec. 31, to take on a new role outside of the University.

The IDEA Center has approximately 30 team members who work with Notre Dame students, faculty and staff to bring their ideas to life. The team also connects manufacturers and other businesses with some of the University’s brightest minds to pursue research that advances product development and helps bring new or improved solutions to the marketplace.

The University is developing a leadership transition plan to sustain the center’s current projects and advance those in the pipeline without interruption.

“Bryan was perfectly suited to come to Notre Dame as the IDEA Center launched. His vision, passion and vast experience have been central to its maturation from a nascent center to an established and respected business incubator,” said Marie Lynn Miranda, the Charles and Jill Fischer Provost. “He has developed a strong team of leaders within the IDEA Center, collaborations across the University and community partnerships that will provide vital support as we manage this transition.”

Ritchie joined Notre Dame in 2016 to lead the IDEA Center, bringing with him an impressive leadership resume across academia, the software industry and management consulting. Before coming to the University, he was president and chief executive officer of GrowthSPORT, a startup private equity investment company. Prior to that, he served as a professor of political economy at Michigan State University for 11 years and associate vice president for research commercialization at the University of Utah for five.