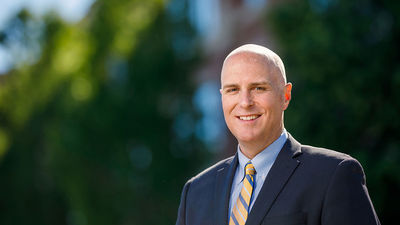 Bryan K. Ritchie, currently president and chief executive officer of GrowthSPORT, has been appointed vice president and associate provost for innovation at the University of Notre Dame, effective in March, Thomas G. Burish, the Charles and Jill Fischer Provost, announced.

In this role, Ritchie will lead the University’s new IDEA Center initiative and coordinate the University’s innovation and entrepreneurship programs. Standing for Innovation, Discovery and Enterprise Acceleration, the IDEA Center will provide technical services and expertise for idea development, technology translation, business formation and commercialization. It is designed to bring the best Notre Dame faculty and student ideas and innovations to market. The Notre Dame Office of Technology Transfer and the staff of Innovation Park will be joined with several new initiatives to comprise the IDEA Center. Ritchie will also help to support student entrepreneurship and innovation curricular and extracurricular programs.

“Bryan is a thoughtful, experienced and successful academic and entrepreneur who has successfully directed a major university commercialization program,” Burish said. “He was the unanimous choice of the search committee as a person highly qualified to lead Notre Dame’s new innovation and commercialization effort.”

Ritchie will also direct the development of the University’s new Thomas H. and Diane G. Quinn Hall for Innovation and Change. Home to the IDEA Center, Quinn Hall will be a 40,000-square-foot, three-level facility located adjacent to the current Judd Leighton Hall at Innovation Park. It will provide space for 25 to 30 startup companies, incorporating thematically designed pods for open collaboration between teams and prospective investors from particular commercial technology sectors.

“Very few universities are thinking about commercialization in the holistic and integrated way that links it to every aspect of the modern university’s mission as Notre Dame is doing. I believe that over time this approach will bring faculty, students, alumni and the community together to transform great discoveries into world-changing innovations,” Ritchie said. “As is the case in many areas now, we should expect to see Notre Dame also achieve a strong leadership role in innovation and commercialization.”

Ritchie brings a combination of work experience to this position that includes time as an executive of high technology companies, a startup founder, an academic and university administrator and a private equity-venture investor. His career began in the software industry where he spent 10 years in executive positions at Novell, Dayna Communication, Iomega and Century Software. During this time he also started two software companies.

From there, he spent 10 years at Michigan State University in the James Madison College international relations department as a faculty member and later as department chair. At MSU, Ritchie also served as associate director for external strategy for the BioEconomy Network in the office of research and graduate studies. He supported two student programs as the co-director — the Michigan Center for Innovation and Economic Prosperity and the school’s Entrepreneurship Network.

In 2015 Ritchie left the University of Utah and started GrowthSPORT, a startup private equity investment company. As its CEO, he leads the company’s investing, which is primarily in seed-stage technology companies. He also serves as a consultant to many Fortune 500 companies where he works with CEOs and business leaders on management strategy, execution and team-building. His consulting has included work with the U.S. Navy on the political economy of Southeast Asia, China and the surrounding area.

Work products of his career include product and business design and development, software and technology design and international product promotion. He is an active blogger and has written two books and dozens of other articles on entrepreneurship, sustainable economic growth, politics and economics and innovation. Several of his discoveries on cellulosic biomass pretreatment and densification have been patented. He is also fluent in speaking, reading and writing Thai and is conversant in several other Asian languages.

Ritchie graduated with honors from the University of Nevada Las Vegas in 1990 with a bachelor of arts degree. He earned a master of business administration degree from the Marriott School at Brigham Young University and a Ph.D. in political economy from Emory University.

Originally published by Sue Lister at news.nd.edu on December 16, 2016.