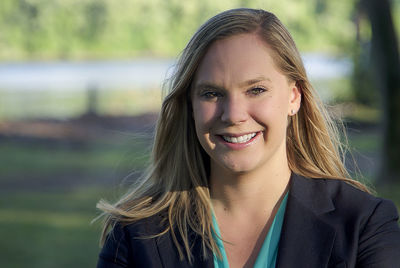 Ashley Kalinauskas graduated from the University of Connecticut with a veterinary sciences degree and was looking for a graduate program that would combine business with “heavy science”. She found that in the 1-year ESTEEM Graduate Program at the University of Notre Dame.

For her capstone project during ESTEEM, Kalinauskas was matched with a Notre Dame professor and tasked to analyze the technology that had been discovered in a purely academic setting, and think about how it could be applied in the real world.

Kalinauskas decided to take what she had already written for her ESTEEM capstone project and create a business plan that could be submitted to the Competition.

“The day after we placed second, we started meeting with investors and that’s when things got real, says Kalinauskas.

Currently, Torigen Pharmaceuticals has a product available on the veterinary market, has treated over 800 animals, and is in the process of raising its second round of capital which will further its growth, and enable the company to make even more of a difference in the lives of animals and the people who love them.  Recently, Forbes 30 Under 30 recognized Kalinauskas for her work with Torigen.

“If it wasn’t for McCloskey, I don’t know if Torigen would actually be here.”