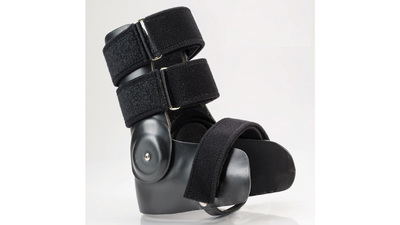 When an offensive lineman steps up to the line of scrimmage, he needs stability and power to hold back the oncoming defense. But even the most minor ankle injuries threaten those abilities, and traditional treatments may not allow the athlete to continue playing. An ankle brace in the shoe may compromise the shoe structure and balance, a boot renders him unable to play, and tape is usually not enough support.

Enter Mike Bean, an associate athletic trainer for the University of Notre Dame football team. He realized one of the biggest problems he faced was how to get an injured or recovering player back onto the field quickly and safely. While there are countless ankle braces available, most require significantly adjusting a patient’s shoe, or the purchase of a new, larger shoe. If the player was already wearing a specialty orthotic, using a brace on top of that was nearly impossible. There wasn’t a good, mid-game remedy on the market.

So Bean designed his own brace, the TayCo External Ankle Brace, with help from Surestep, a custom orthotic company, and Midwest Orthotic & Technology Center, both based out of South Bend, Indiana. The revolutionary over-the-shoe design means that it can be applied instantly to provide immediate functional recovery for athletes, workers or patients. Unlike a traditional brace, which sits inside the shoe and may disrupt normal mechanics, this brace locks the shoe into place with a strap underneath. Not only does this make sure the shoe cannot twist or move away from the ankle, but it does so without jeopardizing the gripping on the bottom of a cleat, boot or sneaker as a boot or cast might.

“We were able to create a brace that protects players, but still allows them to function and do the things they need to do on the football field,” Bean said. “By putting this brace on, they found they had a lot more stability, a lot less discomfort.

“Over the course of the last three years, we’ve had numerous guys who have gone back and played with the brace on, where I don’t think they could have without it,” he says.

Fred Ferlic, an orthopedic surgeon who has worked with Notre Dame athletics for decades and is now leading TayCo, was connected to Bean by the IDEA Center at Notre Dame. He says he has seen firsthand how the brace has helped patients. He’s confident TayCo could replace most braces, casts and walking boots, and provide much greater comfort to patients.

“What we’re after is function, to return a patient to their normal lifestyle as soon as possible,” said Ferlic. “It covers the 40 most diagnosed ankle problems there are.”

As Ferlic notes, while athletes were the inspiration, by far TayCo’s largest market will be patients with injuries ranging from sprains to bone cysts, Achilles tendinitis to drop foot. It’s also a useful tool for injured workers hoping to get back on the job. Because it is lightweight and slips over the shoe, it can, unlike other braces, be worn over work boots or gym shoes, and will allow people to get back to normal functions and off disability leave sooner.

“TayCo can save millions of dollars in getting workers back to work right away,” Ferlic says.

With a patent secured, TayCo is now on the market with four different brace types and three hinge adjustment options. While the acute care sets are available for immediate use and over-the-counter purchase, there is also a quick measurement process to create a custom TayCo brace. Unlike traditional ankle foot orthoses that require casting to get appropriate sizing, TayCo only requires a few quick measurements and photos of the foot, ankle and shoe. Medical providers can purchase the brace from TayCo, but it is also available at reduced rates for athletic trainers or occupational health providers who want to purchase sets of eight, 12 or 16 braces.

Encouraged by proven results such as those of NFL player Nick Martin who wore a TayCo brace for most of his 2015 season at Notre Dame, several other schools have ordered TayCo for their own athletes, including those at Florida State, Alabama, Northwestern and USC. So have independent podiatrists, orthopedic surgeons and athletic trainers. TayCo is now working to expand its reach, and is working with medical distributors to get its braces into doctors’ offices and patients’ homes nationwide.