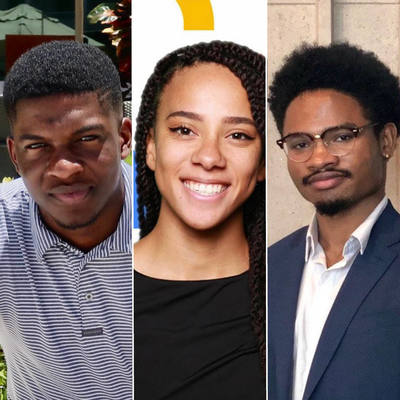 Sophomore pre-med major Edozie Ezeanolue chose the University of Notre Dame because he liked playing Frisbee on the beautiful lawn when he visited the Midwest with high school classmates from Las Vegas on a trip that included Loyola Marymount, Northwestern and Kalamazoo.

“Every school does this,” he says. “They present a façade. They’re trying to sell the school. I did not get a sort of raw view of the school, and I never really did. I ended up liking it, so I’m definitely one of the lucky ones.”

Ezeanolue, who was accepted at Boston University; New York University Stern School of Business; the University of Nevada, Las Vegas and George Washington University, chose Notre Dame because it was the only one he had seen.

“I tried looking up the other schools, but everything I could find was on a message board online,” says Ezeanolue, a first-generation American with no personal connections who could advise him. “I wasn’t going to trust anon425 to give me information about the school on a message board. The only thing I could trust was my college counselor and the statistics I found online, which are not essential to the college experience. There was clearly a problem, and I decided to look more into it.”

When he discovered that more than one-third of students transfer out of the college they picked after the typical process, Ezeanolue founded NXSTEP (NXSTEP.CO) with Notre Dame senior Eddie Cunningham, who will go to work for Google in the fall, and Asia Taylor, a software engineer at Twitter.

The platform aims to connect high school students with ordinary students at their prospective colleges with matched majors, personalities and interests for an unfiltered perspective on real life on campus.

High schoolers answer a 20-question profile and get the top 10 matches from a NXTSTEP student database at the target university. They schedule a phone, message, or video conversation of up to an hour to ask anything they like. The company collects $20 from the users and pays $10 to the college students, who submit a profile and can schedule connections at their convenience.

“You lead the conversation, and you then get information that’s personalized,” Ezeanolue says. “‘How many hours on homework for pre-med? Is organic chemistry hard? What’s the food like? Is it easy to make friends? Were you homesick?’ I feel like people would gain a lot more because they’re asking the questions that matter to them rather than information just based on statistics

We want openness. We want raw discussion. If you don’t like the school, tell them why. If you do, do the same.”

After the interview, the user rates the interviewer on issues including match quality and bias. The company will drop interviewers with low ratings and tweak its algorithms to improve matches. Ezeanolue expects most users will make several calls each, sometimes more than one to the same university.

NXTSTEP, which received a $2,500 grant from the IDEA Center and reached the second round of the McCloskey Business Plan Competition, expects to have a prototype of the site this spring and start operating in the fall. The website will have a highlight reel of curated student-submitted images of life at the university.

The company hopes to partner with high schools to help students gain access. Users may be able to choose to share information with universities so they will be aware of students’ interest. The platform also has potential markets among college counselors and workplaces.

“If I’d had this, I’d be able to get a more in-depth view of the school,” Ezeanolue says. “You cannot make a decision based on the acceptance rate and that we played Frisbee on the lawn.

Eventually we want NXTSTEP to be the place to be when you’re thinking about college.”