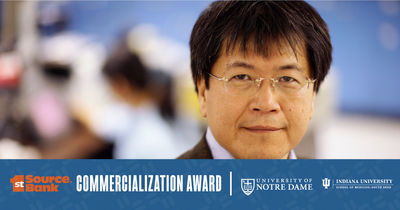 There is no question that over the course of Hsueh-Chia Chang’s 32-year career with the University of Notre Dame, he has made a mark on the world in many arenas.

The Bayer Professor of Engineering and director of the Center for Microfluidics and Medical Diagnostics, is a globally renowned researcher in micro/nanofluidics. Chang has received over $15 million in research funding from the National Science Foundation, the National Institutes of Health and NASA to name a few. He has more than 200 publications in academic journals. More than 20 of his former doctoral students now teach in leading academic universities throughout the world. As complex as his research is, Chang’s work has been featured in media outlets ranging from NBC and the Chicago Sun Times to The Economist and—surprise—Rural TV.

Yet one of his most life-changing accomplishments was winning the 2013 1st Source Bank Commercialization Award for technology he developed that was subsequently licensed to not one startup company, but two: AgenDx and F Cubed (now Cubed Laboratories).

Chang’s selection was based on the cutting edge nature of his microfluidic chip technology that acts as a “micro lab” for molecular level testing and diagnostics. His work was one of the first “high tech” technologies licensed out of Notre Dame. The award was a consummation of Chang’s nearly 40 years of research in this specialized field.

“It was nice to be recognized, but also nice that both companies are located in South Bend and building the city’s startup community,” he says simply.

When his technology was licensed, there was no way of knowing the potential impact on the world. Chang’s day-to-day involvement in AgenDx and Cubed Labs is nominal, but his technology created a strong infrastructure. Each of the companies has made significant progress.

AgenDx licensed Chang’s technology to develop a molecular diagnostics platform, with an initial focus on pancreatic cancer. Joerg Schreiber, vice president for research and development at AgenDx, explains that pancreatic cancer was a natural starting point. “Until now, there were no options for the early detection of pancreatic cancers, so most cases are diagnosed in later stages when surgery is not an option and current treatments are no longer effective,” he says.

“AgenDx has taken Dr. Chang’s technology and continued to make advancements. We are in the process of validating our test, proving it can detect pancreatic cancer with great specificity before it has metastasized and while treatment is still an option.”

AgenDx has raised more than $2 million in early seed rounds and is currently in the midst of a Series A fundraising round. These funds are supporting the development of its pancreatic cancer test along with the disposable microfluidic chips and commercial instrument—now in prototype stage—needed to run it. The diagnostic and disease monitoring test will launch as a lab developed test, which will give AgenDx the data necessary to secure approval from the Food and Drug Administration.

Cubed Laboratories has taken Dr. Chang’s technology in an entirely different direction, creating DNA-based molecular diagnostics devices and test kits to the food manufacturing industry. The test is designed to deliver fast, accurate assay results in virtually any environment. The initial focus is reducing the incidence of salmonella and listeria-related food contamination and illness.

Since the company’s founding in 2008, Cubed Laboratories has raised $13 million to commercialize its technology. On January 1, 2019, the startup merged with Cubed Labs Ltd. in Australia, which sparked the name change from F Cubed to Cubed Laboratories. Former board member, Bruce Brock, is the company’s chief executive officer. He is bullish on the value proposition of their test.

“Food-borne illnesses are devastating for consumers and brands. The Food and Drug Administration requires companies to create and follow strict food safety protocols. Typical tests for salmonella and listeria can take two to ten days to get results. Cubed can have results in 90 minutes. Companies using our technology can get immediate feedback on their food safety equipment cleaning protocols, allowing for continuous total quality improvement and assuring customers their products are free of environmental pathogen contamination,” Brock explains.

Says Brock, “We now have proof of concept of our testing technology, and are focused on securing third party validation in 2020 with a goal of commercializing later that year. By that time we’ll be 12 years into commercializing our technology. This has been a long journey, but my guess is it’s typical of high-tech startups.”

Chang is gratified to see the progress of AgenDx and Cubed Laboratories. He admits his motivation as a researcher is seeing the difference his work is making in the world. Seeing what can be accomplished has led him to choose a new career path, that of an entrepreneur. Chang is in the process of launching his own company, Arcadia Biosciences, with two partners. They are working to finalize a licensing agreement on three Notre Dame technologies.

Chang is energized by his new role. “Since winning the 1st Source Bank Commercialization Award, I’ve become more familiar with the startup culture and what is required. I’m excited to be a founder of a startup and being more involved in overall direction of the company.”