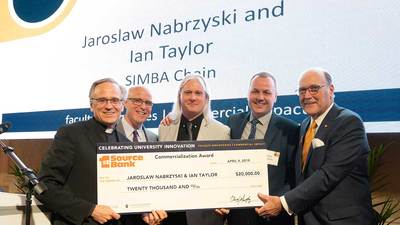 University of Notre Dame faculty members Jaroslaw Nabrzyski and Ian Taylor will share the $20,000 1st Source Bank Commercialization Award for 2019 for their work on SIMBA Chain and its underlying Aladdin software technology. The award was presented Tuesday (April 9) at Notre Dame.

Nabrzyski is the director of the Center for Research Computing (CRC) at Notre Dame. Taylor is a research professor of distributed computing at the center and in the Department of Computer Science and Engineering.

SIMBA is a Blockchain-as-a-Service (BaaS) platform based in the Microsoft Azure Government cloud that makes the complex blockchain technology easy for non-specialists to use to make decentralized applications, called dapps. SIMBA, short for SIMple Blockchain Applications, collaborates with Microsoft and participates in the “Microsoft for Startups” program.

SIMBA CEO Joel Neidig, director of research at Indiana Technology and Manufacturing Companies (ITAMCO) in Plymouth, Indiana, began partnering with Notre Dame five years ago. ITAMCO and the CRC won a Defense Advanced Research Projects Agency (DARPA) grant that, with the help of the IDEA Center at Notre Dame, eventually led to the formation of SIMBA in 2017.

SIMBA collaborated with the CRC, licensing its new “Aladdin” technology that enables users to store cumbersome large files on a network off the blockchain network with linked access, making the blockchain faster and cheaper. Customers include major manufacturers such as Dow Chemical and Caterpillar, as well as the Air Force, Navy, Department of Energy and various health care providers.

The 1st Source Bank Commercialization Award, established in 2008 with a $1 million gift from the bank, is presented each spring to a faculty member from the University of Notre Dame or the Indiana University School of Medicine-South Bend who has successfully transitioned their technology from the lab to the marketplace.

Originally published by Erin Blasko at news.nd.edu on April 10, 2019.