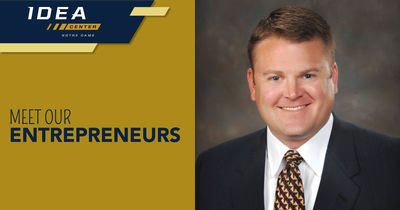 After four years in the financial industry, Chad Barden caught the entrepreneurial bug. Big time. Not that he didn’t enjoy being a commercial lender; it’s just that friends were writing business plans on the backs of napkins and making millions.

Barden wanted to try his hand at startups so in 1999 he accepted a moonlighting gig from two University of Notre Dame graduate students to write a business plan for them. Their idea was to take the graphics processing technology they’d envisioned and deploy it in the medical imaging space.

“I wrote the business plan; told them it would be a tough road to commercialization and wished them luck. I thought that was the end of it. A few weeks later, they asked me to join the company, Nuron, as COO so I quit my job and it was off to the races,” Barden recalls.

Drawing on his banking experience and with the founders’ buy-in, he pivoted the technology to encryption for securing web transactions. He soon raised $1.3 million to bring the solution to market. Eleven months later, Barden led Nuron and its investors to a successful $90 million exit.

“The exit was very fast and I worked extremely hard,” he recounts. “In my euphoria, I thought it was a repeatable experience.”

“Then I learned each startup is different.”

He founded a medical blood testing company, raising $30 million and growing the company to more than 50 employees and $2 million in annual sales. In October 2008, he was negotiating a strategic partnership with a $5 million equity investment that would have given his company a major distribution presence in the human diagnostics market when the stock market crashed and the deal fell through.

“I got caught with my pants down. At the time we had $1.5 million in the bank and a $400,000 a month burn rate. Although the company survived, the momentum was lost. I learned a good lesson,” he says.

Barden headed back to the Notre Dame well, licensing technology to address an issue in the wind turbine industry. When the technology didn’t live up to expectations, he learned another lesson: unproven tech from academic labs can be very risky. And yet, his enthusiasm for licensing university technology didn’t wane; he simply developed his own de-risking process to better qualify opportunities.

“When I consider a licensing deal, I look at three things. Does the technology address a market that’s large or growing rapidly? Is it a platform technology that could be applied to other markets? Does the technology deliver a solution that’s better, faster, or cheaper by a factor of 10x? If I find those three components, I’m interested,” Barden explains.

In 2017, Gary Neidig, president and CEO of ITAMCO, approached Barden about a project his Plymouth, Indiana-based manufacturing and technology company was working on with Notre Dame and the University of Pittsburgh. The three organizations has secured a $1.6 million grant from America Makes to develop simulation software for the 3D metal printing industry, also known as additive manufacturing. The project had concluded, and the resulting technology was now available for licensing through the Notre Dame IDEA Center.

“I was aware of 3D metal printing but didn’t understand the industry’s rapid growth. Having a long relationship with Gary and ITAMCO, I was immediately interested and agreed to join the new company,” Barden explains.

Among the new CEO’s first tasks was securing the technology. Barden negotiated an exclusive license on behalf of ITAMCO with Dick Cox at Notre Dame. “This was the second deal I’d done with Dick and the process went smoothly and was very easy.”

Atlas 3D was founded with Neidig as chairman of the board; Barden as CEO; former Notre Dame postdoctoral student and a lead inventor of the startup’s simulation software, Hao Peng, vice president of product development; Brent Kephart, vice president of sales and marketing; and Joel Neidig, chief technology officer.

Barden hit the ground running and within a week of launching Atlas 3D attended the additive manufacturing industry’s largest trade show. “My approach is to find the 800-pound gorilla and punch it in the nose. I went to the show and talked with all of the major players about what Atlas 3D was doing. I started with folks in the booths and by later that same day I was talking with top executives,” he recalls.

“That response told me we were on to something.”

That something was called Sunata, a cloud-based simulation software sold as a service that solved one of the industry’s most pressing problems: how to orient and support a part to achieve a successful build with minimal thermal distortion and hours and hours of advanced computational analysis. Although it might seem to be a simple process, determining the optimal part orientation for 3D metal printing is extremely difficult. Costly mistakes were and continue to plague the process. To say that adopters of 3D metal printing, including those in the aerospace industry, were frustrated is an understatement.

“3D metal printers cost millions and some of the powdered metal alloys used in printing can be quite costly as well, so when someone says they have a solution to reduce build failures, people listen,” Barden says. “Our software provided the definitive answer to reducing thermal distortion rampant in additive manufacturing of metal parts, which in turn dramatically reduced development time and cost.”

With validation from industry conversations, Barden returned to the IDEA Center seeking investment from the Pit Road Fund. He presented to the IDEA Center’s Bryan Richie, vice president and Cathy and John Martin Associate Provost for Innovation, and Matt Gardner, director of New Ventures and Investment. Within two weeks, Richie and Gardner came back with terms and the investment in Atlas 3D was made.

With the capital, the Atlas 3D team began work in earnest. Among their earliest and most significant wins was a partnership with EOS, the leading global technology provider for industrial 3D printing of metals and plastics. EOS bundled Atlas 3D’s Sunata software into several of their printers. Ultimately, EOS was responsible for nearly 85 percent of Atlas 3D’s sales.

Says Barden, “We had the right partner, with the right appetite for our software, who did the right things to help us succeed.”

Users of EOS’ 3D printers agreed. Said one customer, “I purchased a powder printer seven years ago and never successfully printed a part until I got this software.”

About 15 months into Atlas 3D, Barden approached the chairman, Gary Neidig, with an unexpected recommendation. Let’s exit. Barden explains his logic. “Because of my experience with Nuron, I understood the characteristics of the current market environment.  I believed we could achieve more value for our shareholders by selling the company early rather than scaling it on our own. Gary and the board agreed.”

The Atlas 3D team, which included three fulltime employees, Barden, Peng and Kephart, switched from product development mode to actively pursuing an exit. “We made a strategic decision and went about it very intentionally,” Barden says. “We had four potential acquirers and were very direct with their top executives. ‘Submit your letter of interest by this date or you’re out.’ Two bidders competed and Siemens won. The strategy turned out well for our investors.”

Siemens announced the agreement to acquire Atlas 3D in November 2019, adding it to their Digital Industries Software division where the Sunata simulation software expanded the additive manufacturing capabilities of their Xcelerator software portfolio. Barden, Kephart, and Peng agreed to join Siemens and continue to work on integrating the software into the Siemen’s digital product line. Barden’s original contract was for three months and was later extended to a full year. While working with a global company is far different from guiding an early growth startup, he’s very pleased with Siemen’s entrepreneurial attitude.

“I’ve been very happy with Siemens. We’re getting ready to launch the first integration with their enterprise customers. The job is challenging and exciting; it’s fun to make the elephant dance,” Barden says.

When asked if he would consider licensing technology from the IDEA Center again, Barden quickly responded, “Absolutely!”

“Bryan Richie and his team have taken a bureaucratic process and made it entrepreneurial. It’s a pleasure because everything is streamlined.”

He also encourages entrepreneurs and investors to cultivate a relationship with the IDEA Center. “Great technology is coming out of Notre Dame, but what really helps is the tremendous alumni network who is a powerful conduit for industry connections. They help connect needs with solutions, which makes success that much easier.”

If you are interested in leading a Notre Dame startup like Chad Barden did, please visit this page for more information.