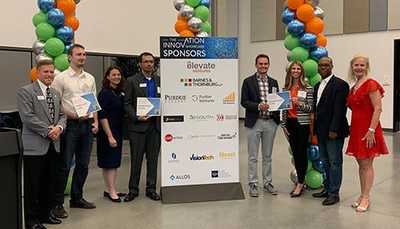 This article originally appeared on Inside Indiana Business

INDIANAPOLIS - A West Lafayette-based company specializing in custom compounded medication for pets took the top spot Thursday at the 2019 Innovation Showcase. Pinpoint Pharma, which recently announced plans to scale its operations, received the $10,000 grand prize from this year's pitch competition. The event featured 20 companies pitching their ideas to a panel of judges at the 11th annual showcase.

Travis Stegemoller with the Venture Club of Indiana, which presents the Innovation Showcase, told Inside INdiana Business Reporter Mary-Rachel Redman the goal of the showcase is to connect Hoosier entrepreneurs with capital.

"We have a lot of really strong founders and folks that want to work with startups with a lot of great ideas floating around but they need capital to grow," said Stegemoller. "One of the challenges in years past that the state has had is being able to actually find the money to fund these companies to get them off the ground and so events like this are very important to making sure the investors can efficiently find deal flow, maybe be introduced to companies that they otherwise wouldn't be introduced to. So investors can just come to this event and get a broad mix of what Indiana has to offer and then facilitate some of those relationships."

Stegemoller says another goal for the event is for companies to potentially find human capital to grow their business.

The Innovation Showcase also featured the inaugural summit held by the Next Level Indiana Fund. The fund was created by the Indiana General Assembly in 2017 and has been providing funding for Indiana venture capital funds and Hoosier businesses. The summit also included some of the venture capital firms that have already received funding from the Next Level Fund detailing their recent performances.

Stegemoller says the goal of the showcase is to connect Hoosier entrepreneurs with capital.