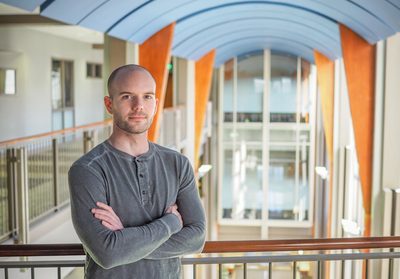 SecūrSpace, a University of Notre Dame startup and co-winner of the 2018 $50,000 McCloskey New Venture Competition grand prize, announced today that it has been selected to participate in the 2018 cohort of MassChallenge Boston, a nationally-ranked high-potential startup accelerator.

Starting June 19 and running for four months, MassChallenge Boston will take the 128-selected early-stage startups and attempt to catapult them forward as businesses by offering free services such as expert business mentorship, access to top corporations, a tailored curriculum and co-working space. The companies will have an opportunity to compete for approximately $2 million in zero-equity cash awards at the end of the program in October.

The Seed Accelerator Rankings Project ranked MassChallenge as one of the top 20 accelerators in the world. Over 1,500 startups have gone through its accelerator program, resulting in a combined $3 billion in funding, $2 billion in product sales and 80,000 jobs.

“Getting into MassChallenge Boston is truly exciting for us,” said Cory Bailey, president of SecūrSpace and a recent MBA graduate of the Mendoza College of Business. “MassChallenge contains an incredible network of investors and corporate mentors, including those in the shipping space, which is core to our business. We’re looking forward to the program and what it will do for our business. The McCloskey New Venture Competition undoubtedly played a major role in preparing us for this next step.”

“The selection of SecūrSpace to be in MassChallenge Boston is further validation for us that the quality of the businesses that are emerging from McCloskey and the IDEA Center are nationally-competitive and are poised to make a strong impact in the world,” said Karen Slaggert, director of student entrepreneurship at the IDEA Center and the director of the McCloskey New Venture Competition. “We’re excited for SecūrSpace’s future and for what emerges for them during and after MassChallenge.”

Founded in 2016, SecūrSpace connects truckers and shippers to the space they need. Through its online marketplace, users can book parking and storage space for trucks, trailers and shipping containers for as little as a day, or as long as several months. SecūrSpace is led by co-founders Lance Theobald, Ben Satterlee, and Cory Bailey. Learn more at https://www.secur.space.