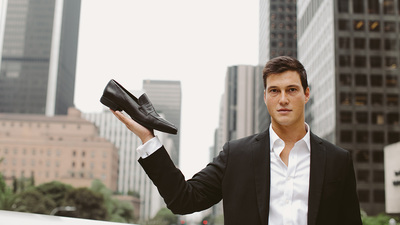 When Justin Schneider heard a friend working on Wall Street complain about uncomfortable dress shoes and the inconvenience of switching to sneakers, he had a thought: Why not combine the two kinds of footwear, to have one pair of formal dress shoes with the comfort and support of a running shoe?

So, Schneider pasted the foam heel of a running shoe onto the sole of a dress shoe, and the Notre Dame alumnus found himself at the starting line of a revolutionary line of footwear.

The company he founded, Wolf & Shepherd, is refining dress shoes by offering athletic comfort alongside quality and craftsmanship. Now handcrafted in Portugal, Wolf & Shepherd shoes use running shoe technology developed in the United States. The company is based in Los Angeles.

“Wolf & Shepherd is blending innovations in materials and manufacturing with tradition and classic style with the goal of creating the next generation of comfortable dress wear,” said Schneider.

Originally from Atlanta, Schneider was a track and field athlete and an industrial design major at Notre Dame. Schneider has used positions at Adidas, New Balance and Reebok to familiarize himself with athletic footwear design. An adventurer by nature, he has spent eight months in Madagascar documenting and illustrating pictures of medicinal plants for National Geographic. 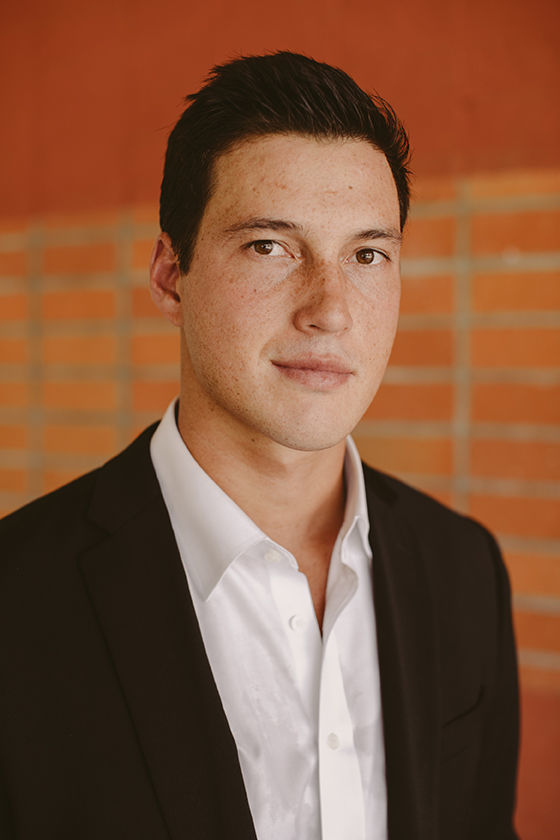 Inspired by the problem faced by many professionals like his friend in New York, Schneider founded the company Wolf & Shepherd in February 2015 after returning from Madagascar.

The company got a publicity boost in June 2016 when runner Juris Silenieks wore a pair of Wolf & Shepherd’s dress shoes and won Atlanta’s Hotlanta Half Marathon in 1:17:05, creating an unofficial Guinness World Record for the fastest half marathon in dress shoes.

As a new player in an already saturated footwear market, Wolf & Shepherd crafted its brand story in relation to people’s everyday lives to create a personal touch, and has been growing its sales by word of mouth, paid advertisement and social media campaigns. As of the end of September, the company enjoyed a rapid year-on-year growth of 700 percent. More than one-third of its customers have bought two or more pairs of performance dress shoes from the company.

Currently, the brand uses online channels to achieve the majority of its sales, since ecommerce lowers the barrier to entry and enables more effective customer outreach. The company is also expanding its collaboration with offline boutiques to give customers a tangible experience and let them physically try the shoes. So far, it has teamed up with 45 retailers nationwide and brands that sell complementary products such as SENE, a Los Angeles-based contemporary men’s fashion brand.

With six employees, Wolf & Shepherd is still in its infancy. Yet in addition to improving product design in response to customer feedback, the company has been looking for the next growth opportunities. The average price of Wolf & Shepherd’s shoes now is $325. The company plans to add more affordable dress shoes to its product portfolio to reach the mass market. Meanwhile, the company is also developing comfortable dress shoes for women.

When Schneider was trying to build up his company from scratch without much startup experience, he reached out to Karen Slaggert, director of student entrepreneurship at the IDEA Center at Notre Dame, for suggestions.

Slaggert connected Schneider with Cristina Gutierrez, a Notre Dame undergraduate majoring in finance, and Michael Vogel, a Notre Dame alumnus and a start-up business advisor, and encouraged Schneider to participate in the McCloskey Business Plan Competition to validate and further develop his initial idea.

“I have a finance background, and I am also interested in design and photography. I know both the business and design component,” said Gutierrez, who mainly worked on market-size research and go-to-market strategy for Wolf & Shepherd in its early stage.

Michael Vogel, a seasoned entrepreneur and Notre Dame 1965 graduate, served as a hands-on mentor for the project. He followed the entire process, did research along with Schneider and Gutierrez, raised questions and gave constructive feedback in each phase of business development to help build up Wolf & Shepherd.

“Not a lot of start-up mentors are (so hands-on),” said Schneider. “Most of them only give high-level directions, but Vogel helped us lay out the groundwork. … He really wants us to build a company with Notre Dame DNA: A business with value and vision that can win and be the best.”

Wolf & Shepherd won the McCloskey Business Plan Competition in 2015. During the competition, the company refined its business plan; determined its marketing strategy, market size and storytelling; and pre-launched its first two designs in the month leading up to the semi-finals of the competition, the first of its kind in the dress shoe market. 800 pairs of shoes were sold in the first three months after pre-launch.

“I never doubt that Wolf & Shepherd will be successful,” said Gutierrez, who has been working for Bain as a consultant since graduating from Notre Dame.

Schneider said his involvement both with other Notre Dame students and with the IDEA center at Notre Dame were pivotal as a launch pad in allowing Wolf & Shepherd to succeed.

Over the years, Notre Dame has seen the significance of cross-disciplinary collaboration in entrepreneurship. The university has planned to launch a new entrepreneurship minor program that will be open to students from all colleges. By leveraging different strengths, the university encouraged students with diverse backgrounds to work as a team to grow original business ideas.

Being an athlete not only ignites Schneider’s desire to design running shoes for runners, but also shapes his strong value system to work through challenges. Schneider, a college decathlete at Notre Dame, said operating business is no different than training and competing in decathlon.

While studying at Notre Dame as a full-time student, he pushed through some 40 hours of training per week on ten different track and field events, and still found time for his personal design projects. In the early days of Wolf & Shepherd, he played a variety of roles and handled a little bit of everything cross-functionally, ranging from factory visits, financing and product design to marketing and customer service.

“As a decathlete, you have to push yourself to be competitive in a variety of different events ranging from throwing a 16-pound steel shot to running 1,500 meters around the track,” said Schneider. “Building a business from scratch requires the same dedication and hard work it takes to be competitive as a decathlete. You have to be able to get by in every discipline. If you fall behind in one event, the whole competition (business) falls apart. And the best athletes and business professionals strive to excel in everything they do. No cracks in your plan and no short cuts… Just be the best!”

The work ethics he learned from his athlete experience, such as self-discipline, commitment, responsibility and efficient execution, have been driving the company’s innovation and progression. Schneider also shares his aspiration, belief and vision to convince more talented and smart people to join his company.

The name of Wolf & Shepherd, Schneider explained, comes from two extremes tied together. “Wolf is ambitious, and shepherd is the leader, usually more relaxed and temperate. We hope our athletic dress shoes perfectly combine the classic style and the athletic fit, as well as ambition and leadership.”