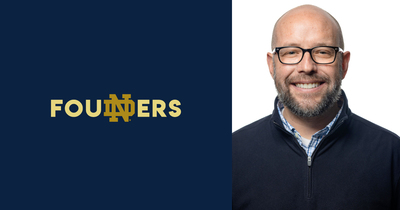 Steve Palmer, an entrepreneur and University of Notre Dame MBA graduate, has advice for others who’d like to start a company:

“The sooner you embrace failure as a pathway to success, the quicker success will come.”

Palmer should know. Although he is 17 years into what is now a highly successful freeze-drying company, Thrive Life, Palmer is about as battle scarred as they come. From his initial move into entrepreneurship when an 18-month non-compete agreement stopped he and his partner from opening a business in their early 20’s to multiple pivots of his current company, he has failed only to rise again. And he’s the first to tell you he credits prayer and, at times, pure dumb luck for his success.

He smiles as he shares the story of his first foray as a company founder. “My first job outside of college was with a pest control company. I thought going to work for someone else was the safe thing to do. But it didn’t take long for me to think I could do it better. A co-worker and I decided to start a competing business. As we wore walking out the door, our boss handed us our non-compete agreement.”

He continues, “That’s when I realized we hadn’t thought this thing through. My wife was three months pregnant with our first child and we didn’t have health insurance. My partner and I were young enough and dumb enough to quit to be entrepreneurs without a plan.”

That was Palmer’s first fail, but he and Jason Budge, his partner in crime and business, got up off the floor and scrambled to start something else. The something else was an innovative shelf system for cans that automatically rotated products so the first one in was the first one out. They named their company Shelf Reliance, launching it in true garage-based entrepreneur fashion: they hit carnivals and road shows across the United States hawking the system to anyone who would watch their pitch.

Funny thing, their grassroots approach worked. Despite all odds, they turned a profit in year one. Major retailers like Costco, Walmart, and Bed Bath & Beyond adopted their space and time-saving system. Within three years, Shelf Reliance was grossing more than $5 million in sales a year.

Palmer shakes his head at the memory. ‘We had no idea our invention would take off. However, we realized Shelf Reliance was a finite business. Once a customer had our system, they didn’t need more. That’s when we got the idea, why not sell food?”

And so Palmer and Budge founded an emergency preparedness food company, Thrive Life. Their initial focus was canned foods as they could sell their shelves, too.

“Emergency preparedness food products is a hard business, but we did really, really well. In 2012, our sales reached $50 million. We thought we were superior marketers, but it was really a combination of factors. Barack Obama was elected to a second term as president, Hurricane Sandy hit, and according to the Mayan Calendar, 2012 was supposed to be the end of the world. People were buying our products like crazy. In 2013, things were much slower. We realized our business was based on politics and disasters and not a sustainable model. That’s when freeze drying came into view.”

When the company was flying high financially, Palmer started talking with a company that sold freeze drying equipment. Seeing an opportunity, he invested $20 million in a freeze-drying plant in American Fork, Utah, that would take two years to build. No problem, thought Palmer.

When the plant was completed in 2014, Thrive Life had stalled. Annual revenue plunged by 30 percent. “Our CFO came into my office and said the new freeze-drying business wasn’t going to happen. Our plan was based on 2012 numbers,” Palmer says. “The plant was my idea and I’d bankrupted the business. I went home and told my wife I’d ruined our life and my partner’s life.”

That night, Palmer attended a class on entrepreneurship (he’d gone back to college to earn his unfinished undergraduate degree). “I was the worst student in the class. That was the icing on the cake. I’d failed.”

Thus began a time of desperate prayer. Palmer consulted with family and friends, looking for a solution. As a last resort, he turned to the Danish company that had sold him the freeze-drying equipment. “That’s when dumb luck kicked in,” Palmer says. “They knew a guy (Mark Harvey) who had 20 years of experience in the freeze-drying industry who’d recently lost his job due to a merger. I immediately got in touch with him.”

The tip turned out to be the answer to Palmer’s prayers. Not only was Mark an expert in freeze-drying, he had a deep list of contacts in the probiotics industry, which Thrive Life’s new plant was ideally suited for. Palmer hired him and pivoted to manufacturing probiotics. Initially used as a supplement to promote gut health, probiotics are now used in a wide range of products from baby foods to yogurts and are thought to have benefits far beyond digestive balance.

Freeze drying is key to making probiotics shelf stable. To be effective, probiotics have to be live. Palmer’s company freeze dries them over 50 hours—they look like Dippin Dots. When reconstituted, they become active again.

Says Palmer, “Although probiotics is a very large industry, there are very few players. And we just happen to be one of only two companies in the United States that freeze dries probiotics. Although we didn’t plan this in 2012, probiotics is now a cornerstone of our company.”

At this point many entrepreneurs would ride the wave and focus on the beach ahead. But Palmer had other ideas. He wanted to go back to school to earn a Master of Business Administration degree. “People choose MBA programs so they can have the best MBA on their resume. I wanted something more and that was to be a better person for the rest of my life.”

Notre Dame was not on his radar until a friend took him to lunch and suggested he go to Notre Dame because “what you’ll get is more than a degree.” On that advice, Palmer added Notre Dame to a list that included Brigham Young University and Northwestern’s Kellogg School of Management. He visited the instate program before heading to South Bend. “It was great,” he says. He never made it to Kellogg.

Still, it was a big decision. Once again, Palmer turned to prayer. And once again, the Lord worked in mysterious—some would say obvious—ways. “My wife and I had just gotten back from church one Sunday and were listening to the Mormon Tabernacle Choir on Spotify. All of a sudden, they started singing the Notre Dame fight song. I took that as a sign that I needed to go to Notre Dame,” he laughs.

During the course of the two-year program, the thing that impressed Palmer most was how the program is taught. “Notre Dame ingrains in you from day one to be a force for good and to make change in a way that benefits society. I needed a good dose of that as an entrepreneur,” he says.

He also formed a friendship with fellow student Sean Conlon who has since become a member of Thrive Life’s board of directors. “Sean has the best business mind I know. He helped me to look at the company differently, more as a platform for freeze drying. This led to a strategic diversification of our business that gives us opportunities to grow and stability we did not have in the past.”

Today, Thrive Life has four areas of focus. First is its emergency preparedness food business, but also a line of backpacking foods which includes successful brands like PEAK REFUEL freeze dried gourmet meals sold through REI and other outfitters. “We hit it out of the park with that one,” Palmer says. Second is probiotics. Third is its pet treat business, which produces freeze dried snacks and kibble to Sean Conlon’s Nashies brand as well as other major pet food companies. The final focus is co-manufacturing where Thrive Foods works with major brands to produce and package their products.

Palmer is surprised by how much he enjoys co-manufacturing, which is now half of Thrive Food’s business. “Really large consumer products companies are interested in freeze drying; it’s much more mainstream than in the 1960’s when it was considered ‘astronaut food.’ We work closely with brands on their research and development and then co-packing. They are stable partners, signing three- to five-year contracts. They also help make us better through plant audits.”

Thrive Foods, a highly technical, freeze-drying platform company hatched by two former would-be pest control entrepreneurs now attracts customers from across the United States, Europe and Asia. Palmer knows how to schmooze them too. In addition to touring the state-of-the-art laboratory and manufacturing operation, he treats guests to stays at the famed Sundance Mountain Resort originally founded by Robert Redford. “It’s hard for them to do business anywhere else after the beauty of the Wasatch Mountains,” he says.

For 17 years, Palmer and Budge have relied on bootstrapping and commercial bank loans to fuel their company. Finally, their bank told them they were too big to rely on traditional lines of credit and suggested investors. After working with a private equity firm in Chicago for eight months, on January 10, 2022, Thrive Foods announced it was merging with Mercer Foods, another freeze-dried food company based in Modesto, California. The deal will allow Thrive Foods to well, thrive, and grow.

Says Palmer, “This merger will allow Thrive to invest in new equipment and opportunities that would have been out of reach before. I anticipate that this combined company will be valued at more than $1 billion within the next four to six years. We have our work cut out for us, but we’ve never been more excited about our plan to get there.”

Looking back over his career, Palmer says the biggest challenge is maintaining strategic focus. “You get so close to the business you forget to monitor at the 10,000-foot level. Being strategic is absolutely critical.”

That provided to be the case over the last two years when the global pandemic wreaked havoc on companies, supply chains, retailers, workforces; you name it. “We were one of the lucky ones,” Palmer says. “We do well during times of crisis. During COVID, people wanted to be healthy and bought more probiotics, they got dogs, went backpacking, and they bought emergency food. Where we did take a hit was in our workforce. Although we have a very loyal core team that’s been with us from day one, recruiting the younger generation is very difficult. Like other companies, we’ve got to figure that out.”

Palmer says the biggest win professionally is his company’s survival and bright future. “The world was forever changed by COVID; it’s still changing. So we’re going to stay flexible and roll with the punches.”

Good advice from an entrepreneur who knows the best way to succeed is to get up, dust off and keep going.