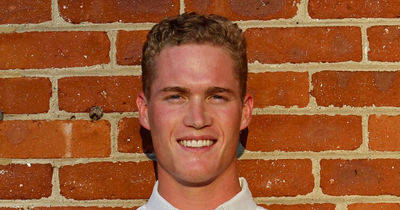 John Power (ND ‘19) happened to stumble upon the IDEA Center during his Sophomore year when — in line with the typical Notre Dame student — he was looking for something new to get involved in. “The IDEA Center was totally unknown to me,” he explains. He was surprised and thrilled to discover how much was going on that he hadn’t known about; once he had his foot in the door, it was going to take a lot to turn him away. “I remember there were volunteer events, I went to those, and was just trying to get my face known.” During his junior year John was hired as a technical analyst where he worked with current New Venture Development and Invention Program Manager, Kunigunda Szentes. As part of what’s known as the “2-stroke” team in the IDEA Center “engine,” John investigated the potential for early Notre Dame faculty-founded startup ideas to continue to grow through the commercialization phase.

The mechanical engineer now works as an associate product manager in a rotational program at Visa. When asked what skills he acquired during his time working in the IDEA Center, Power is particularly passionate about what he learned in regard to the importance of communication. Not only was this skill critical for the success of the team in their collaboration, but also especially important in working with the individuals heading potential startups. “You’re talking about the same product and market, but you’re talking to different people and different audiences. I had to change my message or speak to what they care about. [When it comes to] prospective customers you are trying to find out if they have a problem you can solve.”

In his current position, John finds himself applying the skills he gained through his experience at the IDEA Center. John shares, “if I didn’t work at the IDEA Center I would have had to start from square one [in my new job],” speaking to the leg-up he got from being in an environment where he was exposed to new business terminology every day. Outside of “hard skills” such as market sizing and public speaking, John found the most value in the numerous “soft skills” he developed over the course of his internship. “Coming from a classroom, I was looking for an equation or easy solution, you slowly learn that each one is unique and you need to learn how to get your hands dirty and do the work to get it done. There is no equation you can apply to each [IDEA Center technical] report, I have to take ownership.” Working alongside a supportive team of peer analysts, John’s confidence grew such that he was able to take control of his projects and move projects forward. Now, when John’s manager asks him to complete a task with little guidance, John is able to forge his own path through informed and sometimes out-of-the-box thinking.

Upon reflecting on his time with the IDEA Center, John comments that “what stands out about the IDEA Center [is that] it felt the closest to a real job experience [I’d ever had]. Now that I’m in a real job, it’s not intimidating.“ Beyond the tangible outputs John can describe from his time as a technical analyst, he sums up why he found the work so rewarding: “you’re helping to support an initiative that is a lot bigger than yourself.”