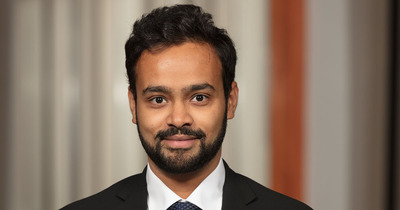 For MBA student Chinmay Jain, landing a job with Amazon might have been his dream career destination, but interning with the IDEA Center became a critical part of his journey to get there. An engineer from India, Chinmay made the transition from six years of professional experience working within the solar panel industry to studying business at Notre Dame. Originally interested in pursuing a job in consulting, Chinmay was surprised when he was approached with an invitation to interview with Amazon during the summer after the first year of his MBA program. While Chinmay was an appealing candidate for consulting positions because of his experiences in product execution and management, he describes feeling pulled towards the product development path.

“Out of nowhere I also got an interview from Amazon during the internship phase. They were asking questions I had a natural inclination for. Without knowing it I would be analyzing products and thinking about how to improve them.” Ironically enough, Chinmay found himself working at the IDEA Center when he was not offered the Amazon internship. However, Chinmay was not discouraged; in fact, he felt assured and reenergized. “I had an idea of what kind of experience I would need to crack that [interview] again during the full-time cycle.”

The IDEA Center became a place where Chinmay would continue to explore his interest in product development while sharpening his problem-solving abilities. Chinmay began work as an Entrepreneurial Lead under the guidance of Ben Hoggan, the IDEA Center’s Director of De-Risking. Working on market sizing, customer validation interviews, and industry research, Chinmay saw a direct connection between the work he was doing in the IDEA Center to the academic work he was doing in his MBA. “Instead of learning a bunch of cool concepts in a vacuum, I wanted to find a safe place to apply [what I was learning in an MBA] and see their effects in real time. This adds a whole layer to the MBA experience. [The IDEA Center] gives you a lot of free space to make that idea your own and to go at it at your own pace, and then they guide you on how to modify your approach.” A significant factor which played into Chinmay’s decision to work at the IDEA Center was the “sandbox” environment where he would not only be putting into practice the new skills he was learning, but where he would also have the flexibility and freedom to tailor his experience to what he hoped to gain. Whether that involved asking for certain projects or seeking out mentorship when he had questions, Chinmay was prepared to dive in.

“A huge part of working with the IDEA Center is you’ll get as much as you give.” Determined to give it his all, Chinmay successfully secured a full time position with Amazon and will begin after the completion of his MBA this year.