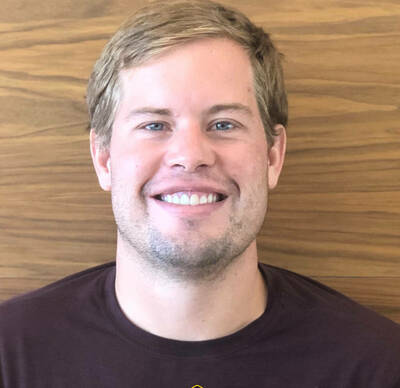 Chris Merrill has the distinction of being the Notre Dame IDEA Center’s first Startup Associate. This is quite an achievement as he almost didn’t attend Notre Dame. Then came a moment of divine intervention.

The story begins three years ago when Merrill was on vacation with his wife. Out of nowhere an idea for a technology he believed would be a gamechanger for teachers popped into his mind. “I thought if I were to start a business, this would be it,” recalls Merrill. “It was theoretical and would take a lot of product development, so I let it go.”

Fast forward a year. Merrill had decided to get a Master’s in Business Administration. The University of Notre Dame and another university closer to home and family were on his short list. It was a tough decision, so he prayed about it. Something told him he was needed at Notre Dame. It didn’t take long for the reason to reveal  itself.

“I applied to the McCloskey New Venture Competition. When I explained my idea for a company, I was told that two Notre Dame faculty members had developed a technology much like I was describing. I looked into the technology, and it was better than my idea. The IDEA Center asked if I’d like to work with the faculty as a product manager to commercialize the technology. It was like the company of my dreams dropped into my lap gift wrapped,” Merrill says.

Embracing his new role at Adapta Education, Merrill worked on funding, product management and sales. When he was offered the role to lead Adapt Education as CEO after graduation, his response was simple. “Sounds awesome.”

“This has been a wonderful learning experience. As a former teacher, I believe in Adapta Education’s advanced testing platform that uses data to help teachers personalize their lesson plans. A cookie cutter approach doesn’t work. To keep students engaged and learning, teaching has to be laser-focused on an individual student’s learning level,” he says. “The platform has been validated in pilots and there’s a good chance it will be successful.”

Merrill has committed a significant amount of time to fundraising for Adapta Education, raising $40,000 from Elevate Ventures in 2021. He is currently in a pre-seed round with angel investors. With a target of $300,000, he has already raised $75,000.

He admits his biggest challenge managing everything on his plate. In addition to being a full-time MBA student and running a company, his wife recently gave birth to twins. Time—and the twins—are precious. Merrill says he wouldn’t change anything about his role as a Startup Associate and his Notre Dame experience. “I’m a career switcher, going from education to entrepreneurship. Doing this project with Adapta Education while earning an MBA has taught me what I need to know to be successful in business.”