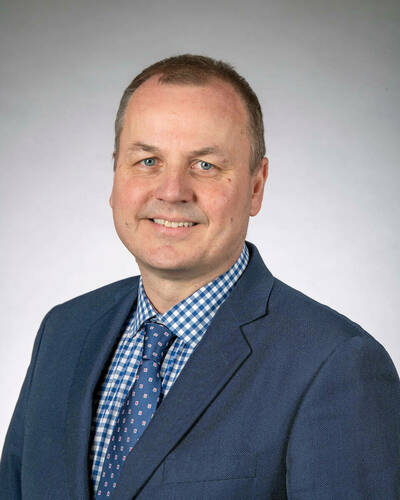 Jarek Nabrzyski is a force to be reckoned with, a researcher of international acclaim, a co-founder of successful startups, an enthusiastic collaborator with academic colleagues, a mentor to both graduate students and student entrepreneurs. His energy is boundless, his ability to juggle multiple initiatives with ease is legendary. Nabrzyski draws his luminosity and drive not from ego—and there are certainly many reasons why he might—but by engaging with everyone around him.

“I enjoy talking with everyone. It’s where I find ideas. It gives me energy,” he explains.

Nabrzyski is the first incoming director of the University of Notre Dame’s Center for Research Computing, an internationally acclaimed research center for advanced computing. Founded in 2006, the Center engages faculty from all university disciplines as well as partners in government and industry to solve complex issues with computing. It’s a role Nabrzyski was expressly recruited for and almost didn’t accept.

His journey to South Bend seems improbable. A native of Poland, he earned Master of Science and doctoral degree in Computer Science and Technology from Poznan University of Technology in his homeland. Along the way, Nabrzyski also earned a certificate in Business Management. “I was interested in entrepreneurship,” he explains.

Post college, he launched his career as an IT manager for a bank before joining the Poznan Supercomputing and Networking Center. During his nearly 13 years at the Center, Nabrzyski found himself traveling to the United States so frequently, he and his family decided to relocate there permanently.

“One of my friends and mentors, Edward Seidel, an astrophysicist, had established a computing and technology center for Louisiana State University in Baton Rouge. He invited me to join him to help with strategy. I had only been there a few months when Seidel left to take a job with the National Science Foundation. The next thing I knew, I was the executive director of a statewide organization with 130 employees.”

A year into the role, Notre Dame came calling. The University sought to create a computing research center of its own and wanted Nabrzyski as its director. “My wife and I had just bought a house, our sons liked their schools, and we were really happy in Baton Rouge, so I told Notre Dame I wasn’t interested. The recruiter insisted I come visit. Reluctantly, I agreed,” he says.

What he found was more than a director’s role. The opportunity was much bigger than Notre Dame initially presented. Nabrzyski would serve as the architect, builder, and director of a world-class computing research center. With the possibilities of this blank sheet of paper dancing in his head, he and his family packed up and moved to South Bend. His enthusiasm is still palpable today.

“I came with a vision of an interdisciplinary environment where high performance computing engineers, research software engineers, and computational scientists would work with faculty across domains to develop novel cyberinfrastructure solutions through research,” he says. “And that is what we’ve done.”

In 2009, the year Nabrzyski joined Notre Dame to run the Center for Research Computing, his team was composed of just six people. In addition to running the Center, he also was a concurrent professor of Computer Science and Engineering and maintained his active research life. Despite multiple responsibilities, Nabrzyski aimed high with the goal of making Notre Dame’s Center for Research Computing among the world’s elite.

“Notre Dame’s Center is a tier two. Although we are an academic department, our faculty are 100 percent focused on research. We work with faculty from all academic departments to support the research agenda of the University through our managed computing assets along with a research, engineering, and administrative staff of more than 50 people with expertise in the application of these resources to multi-disciplinary research interests,” he says.

There’s an interesting back story behind the Blockchain Research Group. Until about five years ago, Nabrzyski and Taylor had very little knowledge of blockchain technology; their research interests were elsewhere. Like many people, they saw blockchain primarily as the underlying technology of cryptocurrency. In 2017, Plymouth, Indiana entrepreneur Joel Neidig approached Nabrzyski about pursuing a DARPA grant together. The U.S. Department of Defense sought a secure messaging platform utilizing blockchain. Neidig thought his family’s company, ITAMCO, and Notre Dame would make a good team.

Nabrzyski was intrigued by the opportunity but wanted Taylor, who was on a family vacation to Europe, on the team. Nabrzyski called and asked Taylor if he wanted to “give it a go.”

“Despite not being an expert in blockchain, which is very complicated and not our expertise at the time, Ian agreed to join Joel and I on the proposal and proceeded to write much of it while still on vacation,” Nabrzyski explains. “Ultimately, we won the DARPA grant and our first blockchain startup, SIMBA Chain, was born.”

The premise behind SIMBA Chain—make the creation of blockchain apps so easy even a non-programmer could develop them—was inspired by one of Nabrzyski’s and Taylor’s earliest and most successful research collaborations. While still living in Europe in 2001-2005, Nabrzyski was leading the GridLab Project. This initiative involved a team of computer scientists, astrophysicists, and other scientist, including Taylor, from 11 countries who were charged with developing and implementing the Grid Application Toolkit and services to enable easy and efficient use of distributed supercomputers in a production grid environment. The resulting toolkit provided easy-to-use functionality through a carefully constructed set of generic higher level grid application programming interfaces (APIs). The Grid Application Toolkit remains a computing industry standard.

“SIMBA Chain employs a similar approach,” Nabrzyski explains. “Using SIMBA’s platform, a person can create a blockchain supported smart contract in about three hours instead of several weeks or even months if programming by hand.”

SIMBA Chain has become one of Nabrzyski’s most successful startups to date. The company in quick succession secured multiple grants from the U.S. Department of Defense. It has created blockchain-based supply solutions for Boeing and other major companies and is now providing asset management to government agencies. In the hot industry of non-fungible tokens, SIMBA Chain is offering custom NFT marketplaces to sports teams and universities. Last September, SIMBA Chain announced a successful $25 million Series A fundraising round, one of the two largest such rounds in Indiana’s history. Nabrzyski has stepped down from SIMBA Chain’s board of directors, which gives him time for new ventures.

With this startup success under his belt, Nabrzyski, together with Ian Taylor and Andrey Kuehlkamp, recently started a blockchain analytics company, called Web3Sense. The company employs state-of-the-art artificial intelligence and machine learning tools to collect, decode, graph, analyze, and provide deep insights into smart contracts, decentralized finance, NFTs,  and other complex transaction ecosystems. The company is focused on working towards closing a seed funding. Nabrzyski is also working with other group of Notre Dame faculty to build a sensor-based driver intoxication detection device.

To round out his portfolio of startups, Nabrzyski co-founded a non-technology company called WONDER with fellow Notre Dame professor  Ilaria Schnyder and Mauro Prina of SpaceX. “In meeting with students, we noticed many suffer from loneliness and a lack of quality relationships. They need more that top grades and monetary success. Often what they are missing is the ability to connect with themselves, others, and God in a real and meaningful way,” he explains.

“WONDER is a spiritual travel agency of sorts that provides learning adventures in beautiful settings such as the American West and encounters with flourishing individuals and communities incorporating a journey of reflection and growth for participants. WONDER also promotes integral ecology. As Pope Francis said, ‘We are part of nature, included in it and thus in constant interaction with it.’  We are now accepting applications and hope to have our first eight trips this summer,” he says.

When not working on his own commercialization activities, Nabrzyski stays busy encouraging Notre Dame colleagues to get involved. “We have many bright faculty at Notre Dame. I want the faculty of the Center for Research Computing as well as in different departments to be entrepreneurial and disclose ideas. We have tremendous computing resources at the Center to help them.”

Nabrzyski takes special pleasure in working with student entrepreneurs. “They are fearless,” he says with a smile. Most recently, he has advised Ellen Joyce of Digital Leader Academy, Rian McDonnell of FloWaste with a Small Business Innovation Research (SBIR) award. FloWaste successfully closed a $1.1 million pre-seed round last fall.

Having served as the principal Investigator on more than 50 national and international research and development projects developing cyberinfrastructure for science and industry, Nabrzyski admits that research remains his passion. There is just one problem:

“I have too many interests!” he laughs. “This is the nature of my work. I need to be able to help social scientists and scholars in the humanities along with high-energy physicists and` biologists. My major personal research interest is how to build and deploy cyberinfrastructure to support science and help scientists scale their research to the next level.”

He continues, “But there’s also the digital ledger technology, blockchains, and developing analytical tools that help us understand complex, decentralized  transaction ecosystems based on private blockchains. I’ve been working on that for the last several years. With Web3Sense, it will be exciting to see how our tools have applications in such sectors as financial services, supply chain management, healthcare, real estate, global trade, government services, and insurance. “

As one can see, Nabrzyski is never at a loss for things to do.

Looking back over the last 13 years at the Notre Dame Center for Research Computing, Nabrzyski gets emotional about what has been achieved as well as what’s to come. The Center is now a National Science Foundation Cyberinfrastructure Center of Excellence. It is also part of a larger national collaboration that received the prestigious HPCwire Readers’ Choice award for Best HPC Collaboration across Academia, Government, and Industry at the 2021 International Conference for High Performance Computing, Networking, Storage and Analysis (SC21).

Nabrzyski does, however, worry about the impact of remote working, a phenomenon that accelerated during the global pandemic. “We are at risk of losing our identity and our culture due to remote workforces. I am a ‘people person’ who feeds off energy of others. If most people work remotely, then what?”

He also points to the severe shortage of people in the cybersecurity and other related fields at Notre Dame and across Indiana. “How do we keep the people we train? When people can work where they want and states like California are willing to pay premium wages for remote workers, we have to change our approach. The market for top computing talent is global. We have to pay at a different scale to get the talent we need.”

Ever the optimist, he returns to form, saying simply, “I love science and research, and I love my job.”