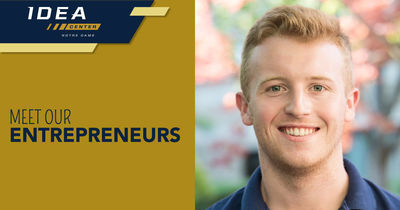 In 2015, Kyle Murphy celebrated his 18th birthday a little differently than most young adults. Instead of the traditional cake-and-candles event with friends and family, Murphy was on a medical mission trip in Guatemala with his father Frederick, a physician, and his sister Kaitlyn, a nurse practitioner. Although he was prepared for what he experienced, he was still slightly shocked.

“Parents were bringing their children to the clinic and asking for vitamins. The kids weren’t thin or anything, but their growth was stunted because their traditional foods—corn, rice and beans—lacked essential micronutrients. My dad, sister, and I left Guatemala wanting to do more to help these and other kids around the world,” Murphy says.

The Murphys are a family of doers but this “to do” was a doozy. According to the U.S. Centers for Disease Control, at least half of children younger than five years worldwide suffer from vitamin and mineral deficiencies. Millions suffer from stunted growth, cognitive delays, weakened immunity, and disease as a result. Undaunted, the Murphys founded a children’s foundation that same year with the goal of equalizing access to nutrition for kids around the world. Three international partners were recruited and the foundation began feeding kids.

That might be the end of the story, but the Murphys were just getting started. Although three of his five sisters had either graduated or were attending Villanova University, Murphy bucked the trend and instead enrolled at the University of Notre Dame. “I was attracted by the academics and athletics like others my age, but what really won me over is Notre Dame’s message of doing good in the world.”

Midway through his collegiate career, Murphy became interested in entrepreneurship. At the same time, he realized that donations alone wouldn’t sustain the family’s children’s foundation. “Growing up, my dad always had business ventures outside of his medical practice. Watching him made me want to do the same. While brainstorming ideas to better fund the foundation and foster nutrition at a larger scale, we came up with the idea of replacing multivitamins with spice blends fortified with micronutrients,” he recalls.

“The idea seemed valid as most if not all cultures use spices. So in 2018, my co-founder (dad) and I launched enspice as a universal solution of delivering micronutrients to children and adults,” he adds. “We also structured it as a social enterprise with a triple bottom line: profits, social impact and environmental sustainability.”

Great ideas don’t always make great companies. To increase the odds, the Murphys recruited the assistance of the Notre Dame IDEA Center and its Commercialization Engine program to de-risk their idea and maximize its commercialization potential. At the same time, Murphy and enspice were selected as one of five student-led startups in participate in the IDEA Center’s summer 2019 Race to Revenue program. Participants receive $10,000 in non-dilutive funding plus mentoring to grow their business during the eight-week internship. His selection, says Murphy, “Made the leap of faith to full-on entrepreneur easier.”

In addition to the internship and startup capital, the IDEA Center’s Engine process provided a structured commercialization process. One of the first hurdles to clear was product development. Murphy soon found that integrating the micronutrients from ten organic fruits and vegetables into a spice blend was pretty close to impossible.

“It took us a year and a half to figure out,” Murphy admits. “We needed suppliers so to find partners I started emailing companies in the vitamin and seasoning/spice industries. We quickly determined one partner wasn’t going to do it. We needed partners and suppliers in both industries. Once we had our supply chain secured, there was a lot of trial and error when importing spices, blending the seasoning mixes and tasting.”

“At this point, we were really excited. Nutritional spice blends are a much better way to deliver micronutrients than pills. You can’t overserve; the food would be inedible with too much seasoning,” Murphy says.

Getting to the commercial line-up required invaluable consumer research that was facilitated by the IDEA Center. The Murphys and their coaches identified “Millennial Moms” as the beachhead market for two reasons: the struggle to get kids to eat and eat well is real and moms are sympathetic to the social good of the product.

“We did a series of focus groups in South Bend that were designed to get us inside the minds of moms, specifically health-conscious professionals in their 20s and 30s; what they were dealing with, what they worried about, their openness to new products, and finally, how they responded to the enspice products,” Murphy explains.

What they discovered was enlightening and accelerated the de-risking process. A core finding was nutrition is a top concern, mainly because of what picky eaters kids are. Gummy vitamins are often the supplement of choice, but there’s concern about using the candy-like vitamins. Kids gobble them down, which poses a health threat if they contain iron. The leading cause of death in kids under age five is iron poisoning. As a result, safer options were found to be a desire of Millennial Moms.

The last focus groups addressed the enspice concept of delivering trace minerals in a seasoning and a taste testing of the seasonings on various foods so the Murphys and their IDEA Center advisors could see real-time reactions. Both sessions were powerful. The Millennials Moms gave the concept two thumbs up and while the seasonings tasted good, they weren’t great.

“One issue was trying to deliver 100 percent of daily nutrient requirements in a single teaspoon. When we stepped back to 50 percent in a teaspoon serving, that really helped. The initial honest feedback drove us to reiterate our flavor profiles until we got to the point where we got smiles and responses like, ‘This is better than what I buy at the store’ and ‘Why not use enspice?’” Murphy says.

enspice was officially de-risked with 85 percent of focus group participants expressing interest. There were a host of other hurdles to cross, including supply chain, pricing, branding, eCommerce, and breaking into brick-and-mortar retail channels, something that is hugely challenging. Again, the IDEA Center came through connecting the Murphys to retailers Walmart and Whole Foods.

Retail presence is a hard nut to crack. Fortunately, the company has built a sustainable eCommerce presence and is currently selling online with customers in over 40 states. “We’re gaining customers, get great shipping rates, but where we really need to be is selling pallets of product. It’s a methodical process and takes time and persistency, but we’re getting there,” he says.

enspice held its first fundraising round in spring 2020, a seed round led by private investors. The capital was used, in part, to fund the brand’s formal launch.

“There are 18 million Millennial Moms in the United States who get information from social media and other moms. So we galvanized 25 ‘mommy bloggers’ as paid and unpaid influencers to review the product and demonstrate our seasonings in recipes and with kids,” Murphy explains.

The biggest platform engaged was Mom Meets, an online community of two million members who come to learn about new products and see influencers using them. On this site alone, enspice racked up 500,000 impressions and 40 five-star published reviews. Murphy says simply, “Having the vision and creating a product people love is extremely gratifying.”

What’s been even more gratifying is the impact being made by the enspice Children’s. Foundation. As of late January 2021, they have provided more than 36,000 nutrition-packed meals to kids with more to come. Doing it with his dad has made it that much better.

Murphy can’t say enough about the IDEA Center and encourages other students, alumni and faculty to take advantage of its services. He also advice others to pursue a venture that’s meaningful. “When you finally have products out there, it’s so worth it.”

If you are interested in leading a Notre Dame startup like Kyle Murphy did, please visit this page for more information.