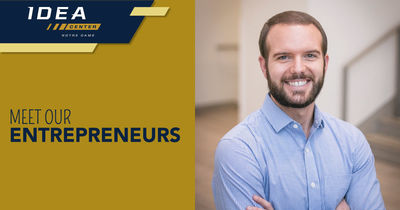 Cory Bailey came to the University of Notre Dame in 2016 to earn a masters of business administration degree. Two years later, he graduated with an honor he hadn’t anticipated. His startup, SecurSpace, won the grand prize of the Notre Dame IDEA Center’s McCloskey New Venture Competition. Two years after that, in early October 2020, Bailey and his co-founders sold SecurSpace to Envase Technologies, which provides mission-critical software for the intermodal supply chain industry.

“It’s a little surreal,” Bailey admits. “Even with the pandemic, 2020 has been an incredible growth year for SecurSpace. We were preparing for a new fundraising round when the exit opportunity with Envase Technologies presented itself. We didn’t expect to exit so early, but when the deal aligned, it was a huge positive for our team, customers, investors and the future.”

He adds, “The entire SecurSpace team is now taking a deep breath.”

When Bailey arrived in South Bend in 2016, SecurSpace was a raw idea; basically an Airbnb for the supply chain and intermodal transportation industries that would connect trucking companies with owners of secure lots for temporary storage of intermodal containers and parking tractor-trailers. Learning of the McCloskey New Venture competition, where student entrepreneurs work with the Notre Dame IDEA Center to further their startups and compete for $400,000 in prizes, Bailey decided to enter with SecurSpace.

“I saw the competition as a learning experience. What I didn’t realize is that it would be a focal point for laying the foundation of SecurSpace,” he says. “The competition and support through the IDEA Center really helped finetune our business plan.”

The first year Bailey entered, SecurSpace made the semifinals. The second year, SecurSpace won the grand prize, splitting the $50,000 prize with co-winner Enlighten Mobility. SecurSpace also won the Lavrock Best Graduate Venture, a $10,000 prize. Two weeks later, Bailey graduated. Without catching a breath, he and the SecurSpace team entered the MassChallenge competition in Boston, one of the top accelerators in the world. They were chosen to participate.

“Lance was working on the West Coast for a company that leases truck chassis for hauling intermodal shipping containers. Trucking companies often didn’t have secure spaces near ports to store the chassis so he’d find places for them. That’s when the idea of being an Airbnb for trucking hit him,” Bailey explains.

While this sounds like an easy problem to solve, it’s anything but. Land around ports and railheads is extremely expensive. For trucking companies, finding secure, affordable outdoor space for storing chassis, containers, and trailers while waiting for ships and trains is close to impossible. But Bailey and Theobald saw a small opening: vacant land.

“Why do owners of vacation properties sign-up with Airbnb? To create an income stream from an owned asset. We believed that facility operators and land lessees near seaports and railheads would be open to the same dynamic of short-term rentals that create revenue without tying their property up,” Bailey says.
“They were.”

SecurSpace launched its minimally viable product in August 2017 focused entirely on ports in Southern California. Their first investor was the result of a cold call email Bailey made to a member of the board of advisors of the Mendoza School of Business. The individual referred Bailey to his son, who liked what he heard and ultimately invested in SecurSpace.

“This is part of the IDEA Center’s value equation to first-time entrepreneurs,” Bailey says. “The Notre Dame network is an invaluable source of mentors, connectors and investors. This was really helpful during the front-end work of SecurSpace.”

In January 2018, the startup completed its first formal fundraising round, raising $600,000 from angel investors. With the money, three of the four co-founders became full-time SecurSpace employees. In March 2019, angel investors fueled a second $1 million capital raise. A third round, a Series A, was on the horizon for 2020.

“Investors were quick to understand our value proposition. The trucking and logistics industries are under pressure to control costs, but also to minimize cargo and equipment theft and keep drivers safe. We help solve those problems,” Bailey says.

With money in the bank, it was time to execute. The founders were faced with a conundrum: what comes first, the chicken or the egg? “Our network of locations is essentially our inventory, so without it we have nothing to sell. Additionally, the broader the network, the more attractive our offering becomes as a comprehensive solution for on-demand yard space, since many companies are operating in several different cities. Expansion became our focus and by the middle of this year, we had more than 600 locations with partner accounts nationwide.”

One key to launching a new business model like that of SecurSpace was understanding customer pain points. Pricing flexibility, on-demand access, ease of use, and trust are important to trucking customers. The fact that SecurSpace does not require long-term contracts and customers only pay for the capacity they need have been huge selling points. This flexibility paid off in spades in the COVID-19 world, which has seen huge disruptions in the supply chain and logistics world.

During the initial COVID-19 lockdown, which saw shutdowns of public rest areas and commercial truck stops, gave SecurSpace an unanticipated boost. “Shippers and truckers needed short-term space for their equipment and we were able to help. It exposed us to new customers and proved our business model fit. However, our business really took off in cities with large seaports. Supply chain disruptions created a huge pain point, secure places to wait the COVID-19 delays and issues out,” Bailey says.

SecurSpace has seen its greatest demand this year in Southern California, including the ports in Los Angeles. Bailey explains the growth as “incredible.” This led to a renewed focus on intermodal solutions where containers of goods are moved using a combination of ships, trucks and trains.

“This development led us to pivot from opening secure lots wherever we could to be very strategic. In addition to California, ports in New York-New Jersey, Houston, Jacksonville, Florida; Savannah, Georgia; and Charleston, South Carolina offer growth opportunities,” Bailey says.

SecurSpace’s growth was not lost on eventual acquirer Envase. The company, which has its own intermodal transportation management system, also liked the technology component of SecurSpace’s offering. This year, the company launched a Gate Management System, which allows SecurSpace partner locations to track equipment against bookings, generate reports, and view and pay invoices online. The system complements Envase’s own offerings.

“One of the reasons we went forward with the sale to Envase was the synergy between our businesses, which creates opportunities for both. The entire SecurSpace team will fold into Envase. Not only will we have more resources to grow our core business, there will be new opportunities to cross-sell customers,” he says.

Bailey is proud of what he’s accomplished with SecurSpace as an entrepreneur and thankful for his time at Notre Dame. “The McCloskey New Venture Competition was a crash course in being a founder. The competition and the IDEA Center also opened a lot of doors, providing networking opportunities for capital, partners, mentors, and customers,” he says.

The most important lesson Bailey learned and now shares with student entrepreneurs is this: “Entrepreneurship is not an academic experience. You have to put yourself out there and be aggressive. My high school football coach had a saying, ‘If you don’t know who you’re supposed to block, just hit somebody.’ The underlying principle there applies to starting a business. Your first move may be the wrong one, but the worst thing you can do is nothing.’”

If you are interested in leading a Notre Dame startup like Cory Bailey did, please visit this page for more information.