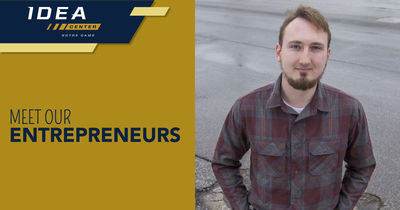 Bradley Tener had a simple reason for turning to the Notre Dame IDEA Center in the early days of his company, Frost Control Systems, in 2017.

“I didn’t want to be among the 90 percent of startups that fail.”

During his student days at the University of Notre Dame, Tener partnered with the City of South Bend to pilot a sensor system to monitor winter driving conditions. The pilot was such a success that he founded a company, Frost Control Systems, to manufacture, deploy, and manage fixed Road Weather Information Systems (RWIS). Tener’s idea was to use hyper local IoT sensors to help cities determine when and where to deploy crews and road deicers to keep traffic moving freely and safely during winter months, while reducing the environmental impact of chemical deicers.

Buoyed by this initial win, Tener realized he needed additional expertise to bring such a technical solution to market. As a recent Notre Dame graduate living in South Bend, the IDEA Center was a welcome resource. Among the first de-risking exercises Tener faced was a panel discussion on product-market fit to determine if Frost Control Systems solved a problem people actually wanted to solve. The panel included former city government officials as well as members of the IDEA Center team.

“I pitched my idea to the panel and one person said it would never work and would fail as soon as we started,” recalls Tener. “There was so much opposition from that individual, the rest of the panel pushed back and suggested I go to ten cities and get their response to Frost Control Systems’ value proposition and pricing.”

Though the critique was brutal, Tener was appreciative of the naysayer’s feedback and the assignment. “Startups can’t operate in an echo chamber of approval. We need to be challenged.”

When he returned to the IDEA Center advisory panel with the results of his assignment, he blew the advisory panel away. The assumption was Tener would be lucky if one city was interested. Instead, nine of the ten companies he spoke with wanted to work with Frost Control Systems immediately and were willing to pay for it. The tenth had just committed to another solution and was unable to switch.

“That got everyone’s attention,” Tener says.

The entrepreneur and his company remained under the IDEA Center’s wing in 2018; a period Tener describes as “extremely helpful.” The monthly advisory sessions were like having a personal trainer, encouraging and holding him accountable to milestones. One of the things he learned early on was that many municipalities were deeply dissatisfied with the performance of their existing Road Weather Information Service providers. Some cities reported half of their equipment being down during winter months. That data point was shocking—and led to a very deliberate point of differentiation for Frost Control Systems.

Explains Tener, “Road safety is why we’re in business so it’s unacceptable for sensors to be down. We decided we would own and maintain our road sensors and every two years would replace them at no cost to our customers with new, more advanced devices. Cities don't have to do any maintenance and our devices are up and monitoring 95 to 99 percent of the time. This became a huge advantage; once our solution is in place, competitors have a hard time selling against us.”

In 2018, less than a year since launching, Tener secured paid trials in three cities from the original nine that conveyed interest. Advisors at the IDEA Center strongly recommended that he participate in the 2019 McCloskey New Venture Competition, an intense, nine-month process that started in fall 2018 and culminated in April 2019 with a live pitch competition.

At first, Tener wasn’t convinced of the competition’s value. Frost Control Systems was gaining market traction and he thought the time-intensive nature of McCloskey would hinder progress. Ultimately, the desire to create a solid foundation led to his entering as a Notre Dame alumni.

“McCloskey takes you through everything you need as a startup owner—your business plan, how to pitch investors, the financials—things that must be addressed upfront rather than waiting,” Tener says.

In what was one of the most competitive McCloskey Competitions ever, Frost Control Systems won the Grand Prize for Best Community Venture, something Tener calls “a humbling experience.”

“Having Notre Dame recognize you as being one of the best, that says it all,” he says. “It really helped accelerate our progress.”

The win also ignited fundraising efforts. In 2019, the IDEA Center’s Pit Road Fund, Elevate Ventures, and a few local investors invested a total of $250,000. Thanks to the infusion of capital and Frost Control Systems’ market readiness, by the end of 2019 the company had installed systems in 15 states and Canada and had a waiting list for 2020.

Tener says Frost Control Systems’ quick start out of the gate is attributable to three things: an overwhelming need to address ever-changing winter road conditions safely, economically and in an environmentally conscious way; a market aware of the high cost and underperformance of current solutions; and having a system that works well and costs one-eighth of competing systems.

Furthermore, the underlying technology improvement is applicable to nearly all traffic equipment. As a result, Frost Control System can iterate and improve their product with further additions. An example of this is seen in Frost’s 2020 system that now includes an integrated snapshot camera so road conditions can be visually confirmed in real time. Already, a third of the company’s customers have been upgraded to the new device. The continued product updates alone make Frost Control Services the company to beat.

The company is also launching a solution for commercial and retail real estate companies to monitor snow and ice on sidewalks and parking decks. Snowplow companies are also approaching Tener with opportunities. And, Frost Control Systems continues to add to its team; 12 people are now employed at its South Bend headquarters.

Tener is 100 percent pleased with the progress Frost Control Systems has made. “The last two years have been beyond crazy! I’m so appreciative of the IDEA Center’s guidance.”

If you are interested in leading a Notre Dame startup like Brad Tener did, please visit this page for more information.