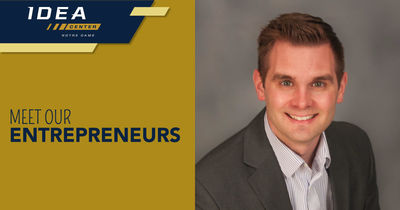 All it took was a phone call, a single phone call, to ignite an enduring partnership and eventual startup company that could be the University of Notre Dame’s first unicorn. SIMBA Chain.

In 2014, Joel Neidig was happily working in the family business, Indiana Technology and Manufacturing Companies (ITAMCO), a 65-year-old company in Plymouth, Ind. ITAMCO’s core business is manufacturing precision gears for heavy duty industrial, military, mining, and construction applications. But with a degree in computer science and a penchant for technology, Neidig had developed a series of manufacturing-related apps that caught the attention of Steven Schmid, a professional of mechanical engineering at the University of Notre Dame.

“He asked my dad (Gary Neidig) and I about collaborating with Notre Dame and other universities on research projects funded by Small Business Innovation Research (SBIR) grants and launching startups from the technology,” recounts Neidig. “We had never considered these types of projects before; we kind of did our own thing. Government-sponsored research and development was a mystery. We didn’t know where to start.”

The idea of collaborating with Notre Dame and the opportunities it would afford proved irresistible to the Neidigs. In 2015, ITAMCO, Notre Dame, and the University of Pittsburgh were awarded a $1.6 million grant from American Maker to develop technology for additive manufacturing. Never ones to do things halfway, the Neidigs invested $1 million in a 3D metal printer for ITAMCO to support the project, but also because they realized 3D metal printing would have a profound impact on the future of manufacturing.

“We saw the potential to transform not just the manufacturing side of our business,” Neidig says, “but also to launch an entirely new, technology development division based on startups.”

When the American Maker project came to an end, ITAMCO licensed the resulting technology from the Notre Dame IDEA Center, founding a 3D printing software company called Atlas 3D. The company was acquired in late 2019 by Siemens. While working with the Notre Dame Center for Research Computing on the Atlas 3D software, Neidig met its director, Jarek Nabrzyski, and a research faculty member, world-renowned expert in distributed computing, Ian Taylor. Impressed, Neidig made a mental note to get back with Nabrzyski and Taylor if the right project came along.

It didn’t take long before an opportunity presented itself in 2017 in the form of a grant from the Defense Advanced Research Projects Agency (DARPA).

“The story behind the DARPA grant is funny,” Neidig recalls. “My brother-in-law’s brother messaged him about a DARPA grant for a secure messaging and transaction platform using blockchain for the U.S. military. We’d built an encrypted messaging app called CryptoChat and thought, ‘We can do this.’ I asked Jarek if Notre Dame and the Center for Research Computing wanted to apply for the grant with ITAMCO. Jarek said yes, but there was a hitch. Ian was on vacation in Europe and the deadline was on top of us.”

Nabrzyski tracked Taylor down and posed the question, “Do you fancy doing this?” Despite not knowing much about blockchain, Taylor said yes.

“We joke that Ian wrote a section of the DARPA proposal in seven different countries,” Neidig says. “We won the grant.”

The team took a deep dive into blockchain, a notoriously complex computing technology with a steep learning curve. Neidig, Taylor, and Nabrzyski dove in and in nine months, ultimately delivered a blockchain-enabled, secure messaging platform that solved a number of mission-critical issues for the U.S. military. This included a cryptographically sound delivery method and record of all transactions whether they are interdepartmental purchase requests, contracts, troop movements, or intelligence, a way for troops on the ground in denied communications environments to secure communications with headquarters and a logistics system safe from hackers.

Corporate structure in place, SIMBA Chain went through the IDEA Center’s de-risking process. Simultaneously, the company was fundraising and working on an SBIR Phase III grant proposal for the U.S. Navy. SIMBA Chain’s 2018 pre-seed investment round was led by Elevate Venture and included the Notre Dame Pit Road Fund in one of its first investments. This was followed by a seed round in 2019 with the Pit Road Fund taking the lead position and Elevate Ventures and First Source Bank joining the round.

Neidig also tapped into the Notre Dame network for introductions to SAP and General Mills. SAP eventually became a partner. Taylor was introduced to entrepreneur Joe Lubin at Ethereum, the second-largest cryptocurrency platform by market capitalization behind Bitcoin. Taylor likened the experience to “talking with God” due to Lubin’s unique foundational role in blockchain. Another Irish introduction led to a senior Microsoft executive, Joe Matz, joining the SIMBA Chain team as an executive advisor with the power and connections to accelerate adoption of SIMBA Chain’s blockchain platform.

By late 2018, SIMBA Chain’s business model had solidified into cloud-based, smart-contract-as-a-service (SCaaS) platform that enabled users across a variety of skill sets to quickly develop and deploy decentralized applications (DApps) for iOS, Android and the web for a variety of business and military use cases. This led to SIMBA Chain becoming a Microsoft co-selling partner and a growing list of lucrative contracts with the U.S. military for blockchain solutions.

Fast forward to 2020 and SIMBA Chain’s momentum has accelerated exponentially. The company now has 20 fulltime and five part-time employees, the majority in South Bend. They have won more than $12 million in government contracts, largely with the U.S. Department of Defense. They inked a high-profile project with TOKS, one of Mexico’s largest restaurant chains. Over the last year-and-a-half, they’ve garnered 3,000 users on their open platform. Their platform supports seven different blockchains, a unique level of connectivity.

Neidig is quick to say none of this would have been possible without Notre Dame. “What I’ve learned over the past few years is you have to surround yourself with amazing partners and people. Notre Dame is both.”

He adds that ITAMCO is definitely open to licensing more technology from Notre Dame. “We’re always looking for opportunities to be successful with Notre Dame.”

If you are interested in leading a Notre Dame startup like Chad Barden did, please visit this page for more information.