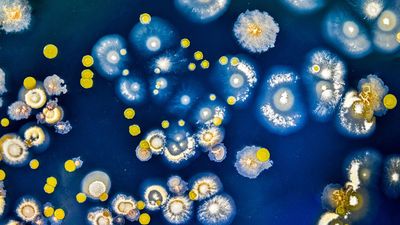 Bacterial infections hardly seem like a conspiracy, but according to a group of Notre Dame researchers, these little cells may indeed be coordinating with one another not only to infect, but also to avoid antibiotics and treatment.

Back in 2014, Notre Dame scientists Mark Alber and Joshua Shrout published a paper about the movement and behavior of Pseudomonas aeruginosa, a bacterium notorious for its spread in hospitals among patients with compromised immune systems. According to the CDC, the bacteria is responsible for 51,000 hospital infections in the U.S. each year, of which 6,000 are multi-drug resistant and 400 result in fatalities[1].

The paper noted that the bacteria’s pili allow it to brake and change direction quickly in order to avoid antibiotics, but also highlighted that each bacterium does not work alone – they operate as a swarm, linking together to synchronize movements. Alber, now at the University of California Riverside, created a mathematical model to simulate this social bacterial movement, but wanted to improve its precision with the help of additional biological experiments and image analysis. In time, the study could also help biologists design better treatments.

But to study the microscopic movements of a large sample size would be challenging if not impossible for individual researchers. Instead, computer science and engineering professor Danny Chen and his graduate student, Jianxu Chen, were called to create a computer program to monitor large numbers of bacteria via time-lapse photos so the researchers could quantify results with improved accuracy.

Officially titled “cMark: a Matlab toolkit for segmentation and tracking of cells in time-lapse images,” the program has three essential elements. First, it can detect individual cells and repeatedly take a picture of each one every second. Second, as these pictures are strung together, the program can track things like distance and speed as those cells move, divide and change. Finally, there is a human correction element. Researchers can manually ensure the computer is tracking the appropriate cells and make necessary adjustments. Jianxu Chen says the end result is a program that is 95 to 98 percent accurate, largely contingent on the quality of image.

Jianxu Chen mentions that cell behavior is an active research area. When the team realized their tool could be of use elsewhere, they decided to make it publicly available.

“There are a lot of research groups across the country who want to do this type of analysis but they don’t have that tool,” says Jianxu Chen.

In the Notre Dame lab, cMark has only been tested on Pseudomonas aeruginosa and Myxococcus xanthus, another colonizing bacteria, but the algorithms are largely generic which should make the tool applicable across a wide variety of bacteria and cell types.

“When we developed the algorithm, we tried to make it as general as possible instead of doing some specific design for these two cells,” Jianxu Chen says.

In May, the complete open source package was released through the Office of Technology Transfer at Notre Dame. The program allows researchers to provide time-lapse images from their own research from which cells can be tracked and monitored, all free of charge.

As use expands to include new cell, virus and bacteria behavior, the group anticipates new issues may arise, but they’re looking forward to understanding how effective the program is on a wider range of applications.

Danny Chen says that in time, the goal is not only to help scientists better understand cell behavior, but in so doing, also to improve the way infections and diseases are treated.