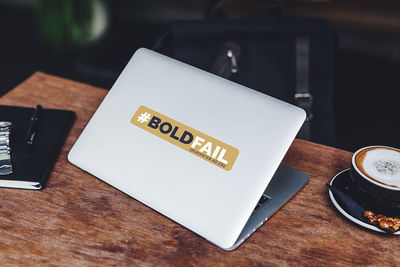 Meet Jake. You might recognize him. Jake is a sophomore at the University of North Carolina at Chapel Hill who has struggled with severe anxiety since he was in high school, anxiety driven by a paralyzing fear that one failure would doom his drive to get into the best college, get the best job, and live the best life. He thinks one failure will make him a total failure.1 Jake avoids taking any risk – and he’s certainly not going to go out there and try to start his own company.

That’s not just an issue for Jake. Great research is showing that the anxiety of failure is a growing problem that’s hindering many of the nation’s college-age youth. This is a major problem for our nation’s future. Fewer startup companies equates to a lackluster economy with an overall diminished quality of life. No risk, no reward.

The cure for this fear-of-failure mindset – for Jake and for the country – is an entrepreneurial mindset that sees the future, seizes opportunity and embraces failure as a routine step toward success, a chance to persevere or pivot rather than quit. That’s what the IDEA Center instills.

It’s a big solution to a big problem.

Jake’s generation is launching fewer startups than any other generation since somebody started counting 30 years ago. Only 3.6 percent of adults younger than 30 owned a business in 2013, down from nearly 11 percent in 1989.

“The reality is that the typical American entrepreneur isn’t that hover-boarding kid in a hoodie; it’s his mom or dad,” writes Derek Thompson in The Atlantic. “In fact, the only age group with rising entrepreneurial activity in the last two decades is people between 55 and 65.”

Many economists say this is a looming crisis. “We should be sending off yellow flares now,” warns Mark Zandi, chief economist at Moody’s Analytics, and John Dearie (‘86, Alumni), director of the Center for American Entrepreneurship agrees: “this is nothing short of a national emergency.”

The dearth of startup launches may possibly be linked to a carefully-curated path to success impressed on a generation of well-educated, well-off girls and boys from the time their parents land them in the city’s best preschool. Those people want to make something of themselves, and rightfully so. They think they know how. They also think that one misstep will turn their upward path into a cliff edge.

The high school focus for young adults like Jake was: graduate with a 4.2 GPA, score high in multiple Advanced Placement classes, take challenging courses, become valedictorian, score close to a 1600 on the SAT and/or a 36 on the ACT, play at the top of one or more team sports, volunteer or perform community service, get scholarships, decide on a career, and, above all, get into a good college.

“There’s always one more activity, one more A.P. class, one more thing to do in order to get into a top college,” says Suniya Luthar, a professor of psychology at Arizona State University who studies the psychological well-being of youth. “Kids have a sense that they’re not measuring up. The pressure is relentless and getting worse.”

Jake often imagined that if he got one bad grade on a quiz, he’d get a bad grade in that class, leading to a cascading domino effect of not getting into a good college, not getting a good job, and becoming a “total failure.”

This pressure starts over when the Jakes win admission to that coveted Top 20 “Best College Ranking” school: get into a prestigious program, get good grades, score hard-to-get internships, do well on a college sports team, get hired by a prestigious firm in senior year. Next: get a prestigious job, earn a six-figure salary, climb the corporate ladder, etc., etc. Above all: Do. Not. Fail.

While there’s absolutely nothing wrong with pursuing a life path like this – in fact, striving for success is admirable – not anticipating or accepting failure along the way can be damaging. Anxiety is now the number one reason – surpassing depression – why college students seek counseling services, accelerating from 38 percent in 2008 to 51 percent, according to a survey from the Association for University and College Counseling Center Directors in 2017. In another survey, the American College Health Association found a significant increase — to 62 percent in 2016 from 50 percent in 2011 — of undergraduates reporting “overwhelming anxiety” in the previous year.

In 1985, the Higher Education Research Institute at the University of California, Los Angeles began asking incoming college freshmen whether they “felt overwhelmed by all I had to do” during the previous year. In 1985, 18 percent said yes. By 2010, that number had increased to 29 percent. Last year, it surged to 41 percent. Ana Bakshi, director of the Oxford Foundry at Oxford University, says that “overcoming fear of failure tops the list” of requests for help that the program receives from students.

By the time many students graduate from college, failure-avoidance has become a reflex. Anything with a high risk of failure, like starting a business, is something to be avoided at all costs. According to a 2017 survey by ORC International on behalf of EY and Junior Achievement, only 30 percent of teens would even consider starting a business today because it’s “too risky” and there’s “not enough money in it.” Only 16 percent of today’s teens have no worries at all about launching a business. At the same time, 53 percent of parents have no concerns about their children starting a business as an adult, a surprising generational divide.

If the nation is going to encourage entrepreneurship for its own economic future, it needs to figure out how to remove as many roadblocks as possible to support young people’s initiatives. One big roadblock is a misunderstanding of failure.

Failure by itself is neutral, neither good nor bad. The question is: what did we learn from it? Failure in operations and failure that results from complexity can be prevented with proper processes, oversight and care, which might need refinement. According to Amy Edmonson, a professor at Harvard Business School, failure that comes from pushing beyond boundaries is a commendable, necessary step because it breaks new ground on the path to discovery.

Thomas Edison famously said that he found many ways not to make a light bulb before he found one that worked. “I speak without exaggeration when I say that I have constructed 3,000 different theories in connection with the electric light, each one of them reasonable and apparently likely to be true,” he wrote. “Yet only in two cases did my experiments prove the truth of my theory.” After each failure, he figured out a new way to move forward. He went on to start 14 companies, including General Electric.

Failure is expected, even welcomed, at the IDEA Center. It operates under a no-judgment zone and wants to hear all students’ business ideas. The staff will celebrate with students when an idea doesn’t work because they know those students learned important lessons from the process and that they are one step closer to something that might succeed. Even if a student’s idea never develops, they will have learned invaluable skillsets that will boost their career.

It’s common for entrepreneurs’ first, second or even fifth ideas to fail, but those who persist boldly in their failures are often rewarded later with success (and they will still be way ahead of Edison).

The IDEA Center walks with students through the entire process of working through their business ideas and cheers them on every step of the way. Many of the ideas students have submitted to the center haven’t worked, but some of those students whose early ideas failed have gone on to build successful companies. Consider the example of Marissa Koscielski (’17, McGlinn), who helped launch a company called Navahealth. While it didn’t work out, her next project, Enlighten Mobility, was the co-winner of the 2018 McCloskey New Venture Competition and was selected for a med-tech accelerator. These resources are now helping the company quickly ramp up.

Today’s students are what the nation needs for its future success and well-being. That’s too important for the fear of failure to stop.

1 The description of the student suffering from anxiety and related observations draws on “Why Are More American Teenagers Than Ever Suffering From Severe Anxiety?” by Benoit Denizet-Lewis, published in The New York Times Magazine on Oct. 11, 2017. https://www.nytimes.com/2017/10/11/magazine/why-are-more-american-teenagers-than-ever-suffering-from-severe-anxiety.html.